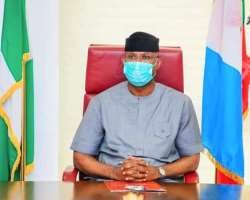 The Deputy Senate President, Senator Ovie Omo-Agege, on Wednesday appealed to members of the Reformed Niger Delta Avengers to stop their planned attacks on oil facilities in the region.

His Special Adviser, Media and Publicity, Yomi Odunuga, said in a statement issued on Wednesday in Abuja that Omo-Agege’s appeal came on the heels of recent threats by a coalition of nine militant groups in the Niger Delta expressing readiness to resume hostilities by attacking oil and gas facilities.

Omo-Agege made the appeal when he hosted a delegation of the Oil and Gas Host Communities of Nigeria, led by elder statesman, Chief Wellington Okrika.

The militant groups, at an emergency meeting in Delta State, had announced their preparedness to dismiss the ceasefire accord with the Federal Government and engage the military forces.

They threatened to resume attacks on some identified oil facilities if nothing was done to redress the issues of poor welfare, armed oppression and inequality in standard of living between the citizens and political elite.

Omo-Agege, at the meeting with HOSCON, noted that the execution of the threat would create economic setback for the country and additional environmental degradation of the Niger Delta environment.

The Delta Central lawmaker urged the agitators to sheathe their swords and allow peace to reign; assuring that their demands would be tabled before the President Muhammadu Buhari.

He said: “With the nation still battling with the challenges posed by COVID-19 and the aftermath of #EndSARS protests which was hijacked by hoodlums, it cannot afford another militancy problem at the moment.

“Whatever it is, we must maintain peace in the Niger Delta. I say this in view of the new agitations by the Reformed Niger Delta Avengers.

“We are just coming out of the #EndSARS protest which, of course, we all witnessed how a peaceful protest was hijacked by those with sinister agenda.

“We are all witnesses to what happened afterwards even when we must acknowledge that in a democracy, protest is a right provided those that do it, do so peacefully without abridging the rights of others.”

Omo-Agege urged HOSCON members to go back to their people in the creeks and tell them their leaders were working for their good.

He said: “We are here to champion their request; we don’t want the peace of the Niger Delta to be disturbed or disrupted, and we are here to protect the interest of our people.

“Yes, I may be the deputy president of the Senate today, but I am first of all, a senator representing my people, I am here and I am your own, I am your eye, we shall not disappoint you.

“Take this commendation to our brothers in the creeks that they have done well in keeping the peace and we will table their request before the authorities as they have channelled that request through me. We shall ensure the right things are done.”

On the Petroleum Industry Bill, Omo-Agege argued that the annual contribution of 2.5 per cent actual operating expenditure by oil companies to the Host Community Development Trust Fund would be increased to at least five per cent.

He also reiterated his call at the second reading of the Bill on the floor of the Senate, where he made a case for gas flaring penalties to be paid to the host communities and not to the Federation Account.

He said: “I also believe gas flaring penalty cost should come to the host communities and I am sure we have impressed it on our colleagues to allow that to stay.

“The money shouldn’t go to the Federation Account, but to the people whose environments are impacted by gas flaring.”

According to Imo-Agege, the funds will be used to ameliorate the living conditions in Niger Delta communities as they remain the ones that bear the burden of environmental degradation from the oil industry.

He said: “That I come from the oil bearing communities is one of the reasons why I am deputy president of the Senate today given our contributions to the economy of the country.

“It is only natural that I champion anything that will promote the interest of the people of the Niger Delta.

“The PIB is a very crucial Bill. If properly handled, it would bring a lot of Foreign Direct Investments into the oil economy.

“This is the best time to take advantage of the oil we have and the best way to do so it to encourage Foreign Direct Investments.

“This can only be achieved when the Niger Delta is peaceful; that is why I am suing for peace.

“Let the Niger Delta region begin to look like the region that produces the wealth of the country.

“The Host Community component of the PIB law is of utmost importance to us in the National Assembly and we believe it should be a win-win for all stakeholders.

“And so, we are determined to ensure that we have an improvement on what we have before.

“I am also confident that we have made good impression with our colleagues and we would get something favourable for the oil bearing communities.”

Earlier, Chief Okrika called on Omo-Agege to intervene in the issues brought before the Federal Government concerning the PIB, gas flaring, 13 per cent derivation payment to the states instead of to the oil-bearing communities.

He also urged him to intervene in the N98 billion gas flare fund and the controversy surrounding the Pipeline Surveillance Contract awarded to some Niger Delta leaders.

He lauded the legislative interventions of the senator, adding that members were impressed with his contributions not only on issues concerning the Niger Delta, but his general contributions on matters relating to national discourse.