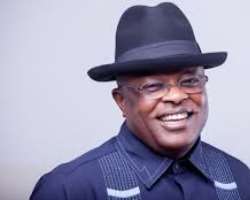 Convener of Ebonyi State Indigenes in the Diaspora (AESID), Ambassador Paschal Oluchukwu, has cautioned Ebonyi State governor, Dave Umahi, against using any form of coercion to draw Ebonyi lawmakers into the All Progressives Congress (APC).

Oluchukwu was reacting to the rumoured plan of the governor to defect to the APC, warning Umahi not to intimidate politicians from the state to follow a political course that is against their will.

While the group believes Umahi can pursue his ambition using any platform, AESID insists the governor should not coerce or Ebonyi politicians into any party against their will.