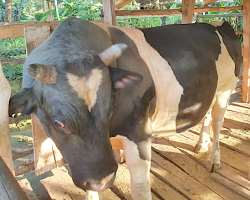 In the morning of 18th October 2020, the Bull fighting champion Malinya Pogba from Kakamega County in Western Kenya succumbed to death after short battle with east coast fever. It was a sad mournful morning for those that enjoy watching bull-fighting matches. The news of Pogba’s death immediately send the social media and conventional media platforms mad with showers of encomia and streams of messages of condolences from the bull-fighting fandom as well as bull-fighting cultural consumers from all over the world. Analytical looking at geographical diversity of the social media populations that expressed their disappointment after getting the bad news about death of Malinya Pogba reveals that Pogba’s death was a lesson enough that the bull fighting culture in Western Kenya enjoys universal consumption. It is only unfortunate that Kenya government has condemned this world-wide admired culture to politically motivated rural neglect. This political attitude towards bull-fighting need to change. The fact to be remembered is that, in spite of opportunistic invasions by selfish politicians to monkey-wrench well intended cultural send-off of Malinya Pogba, still the death of Malinya Pogba and the dramatic installation of the four-year-old Sanchez to be the successor was a cultural moment with enough dimensions to attract commercial tourism.

Brief reflection about history of death of famous animals in Kenya reveals that Malinya Pogba is one of the three animals in Kenya to become famous in their death. The other two are Omweri the Luo snake that died three decades ago in Kisumu and then Sudan the white Rhino that died while undergoing treatment at Ol Pejeta animal Sanctuary. Omweri was famed for his ritual significance among the Luo people, whereas Sudan was mourned for being the last one of the kind in the family of white rhinos. But above all else, Malinya Pogba’s death was a deep controversy in that he had just won the 2020 bull fighting match held at Bukhungu stadium three months preceding his death. Even though Malinya Pogba was owned by Dr Bon Khalwale, but his cultural significance inspires strong sentimentality and cultural identity among the Idakho people in Ikolomani sub-county, this was evident wave of emotions that cut across their communities on learning that Malinya Pogba was dead. It was a lesson that cows are not only kept for meat, milk and beasts of burden but they can also be kept as totems and trade wares for commercial tourism.

It was also a lesson that there is need for radical adjustments when it comes to the strategic efforts in marketing tourism; we should not only focus on popularizing mountains, oceans or coastlines, caves and migration of wild-cows at Serengeti, but we are also technically challenged to popularize cultural heritages of our people with intentions to have the same cultures be commercialized on international and local tourism markets. For example, the same Idakho people has very beautiful Isuguti traditional dance along-side their peculiar bull-fighting culture.

Similarly, the larger Western Kenya region has other culturally arresting traditions and rituals that be commercialized. Interesting and rare culture like white ants (chiswa) harvesting, Bukusu traditional circumcision, Tiriki traditional circumcision, the Bukusu’s Balunda clan traditional burial ritual where the corpse is buried in a sitting position , the Bukusu oral tradition of Khuswala Kumuse, and as well as very many other cultures depending on the situation and circumstances in which special traditions are performed likes of the Bunyala snake-charming ritual performed in relation to rain-making and thunder driving.

In fact, with the well devolved system of governance in Kenya it should not be difficult to institutionalize and commercialize people’s culture. Ministries of culture at County government levels have moral and commercial obligation to identify marketable cultures within the counties and then develop the plan of action in regard to institutionalization and marketing of the identified cultures. It is so disappointing that the County governments in the Western region of Kenya are openly oblivious to commercialization of their local cultures. But still, this political oblivion to our cultures must not work as a barricade to entrepreneurial venturing in our cultures. In fact, young entrepreneurs can as well take political neglect of local cultures as an opportunity and then take advantage of youthful knowledge in digital technology to venture in online selling of cultural heritages, all economic assessments point to the projections that such type of venture will never fail to pay-back in time, both in terms of money and social net-working.

Technically, politics and private entrepreneurship alone cannot globalize commercial consumption of our cultural heritages, the media should be substantially involved in sensitization of the local communities about commercial value of their culture as well as popularizing the same cultural heritages to the global audience. This is a point at which National Television (NTV) has to be saluted for the fair coverage it displayed in dealing with news of Malinya Pogba death. These media strategies are the same efforts used by developed economies, from example, the TV France 24, is so aggressive when it comes to branding and popularization of French culture, French literature, French language and French traditional heritages. Thus, our media has moral duty to help our people market their cultural heritages.

It also has to be stressed that selling culture requires self-confidence and intellectual audacity. This will help in countering gospels by elitist religions which have always equated African culture to sinful repugnance and vulgarity. What I mean is that Christian intellectuals will find bull-fighting in Kakamega to be a backward culture redolent of paganism and satanic conscience but treat with respect the same bull-fighting culture in Spain and Portugal as holy recreation, just in the same way the Western Christianity highly condemns African family culture of polygamous marriages, but the same Western church is evidently on the gradual path of justifying sanctification of church based same-sex marriages. The logic here is not about divinity of culture, but it is all about the Western efforts to use cultural imperialism to create crisis of self-doubt to be punctiliously infiltrated as collective consciousness among Africans as once argued by Chinua Achebe in Hopes and Impediments. The truth is that there is nothing sinful about African cultures, thus we are all duty-bound to walk with our heads high and market out cultures the same way Europeans are proudly marketing their culture of non-binary sexuality.