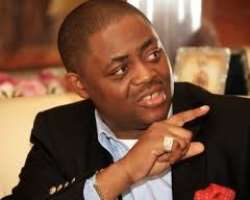 Critic, Femi Fani-Kayode has said the Nigerian Army’s claim that the Lagos State Government ordered the deployment of the military has grave implications for Governor Babajide Sanwo-Olu.

The 81 Division of the Nigerian Army had on Tuesday said the decision to call in the army was taken by the Lagos State Government after it declared a curfew last Tuesday.

The army also denied ever shooting at #EndSARS protesters at the Lekki Tollgate.

Major Osoba Olaniyi, Acting Director Army Public Relations, in a statement said the army were called out after the state government declared a curfew to maintain law and order.

Reacting to this development, Fani-Kayode said the army had claimed that Lagos State Government ordered its deployment.

He said the implications for this for Sanwo-Olu were grave, saying he had been thrown under the bus by the military.

“The Nigerian Army claim it was the LASG that asked for soldiers to be deployed at Lekki. The implications of this for Jide Sanwo-Olu are grave. He has been thrown under the bus by the military,” he tweeted.

Fani-Kayode had earlier faulted Sanwo-Olu on the number of people who died at the Lekki Tollgate when soldiers opened fire on #EndSARS protesters.

He said the governor had few days ago said no person was killed, but that he told CNN on Monday that two people died.

He said by tomorrow, the governor would be forced to admit to the world that even more were killed.

Fani-Kayode also said Sanwo-Olu rightly said soldiers did the killing, but asked whether those who removed the CCTVs, street lights and tollgate were soldiers too.

He said it appeared that few people in Sanwo-Olu’s government might have had a hand in the barbaric act of terror.

In his words: “Jide Sanwo-Olu, a few days ago, you told the Nigerian people that no-one was killed at the #Lekki tollgate Massacre.

“Yesterday you told CNN that 2 people were killed. Tomorrow you will be forced to admit to the world that even more were killed.

“The noose is tightening! You said soldiers did the killing and you are right. But were those that turned off the CCTV cameras, the street lights, the toll gate lights & the bill board lights soldiers too?