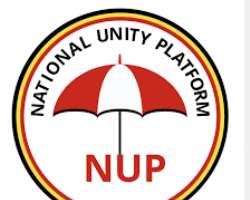 NUP was an equivalent of a shelf corporation in business that exists only on paper, so its owners can hide its assets. A lot of people in developed nations start shelf companies--- its perfectly OK to start a shelf company, open a bank account for it, give it credit history, tax returns,e.t.c, and then sell it. Shelf companies are legal. NUP is 16 years old, as old as FDC, though some people mistakenly call it a 3 months party.

I called my mum yesterday in the morning 🌄 before the judgement was passed, because she's a Kyagulanyi's fan, and I told her not to worry , as I strongly believed that M7 would choose to keep NUP on the books for a while. Museveni is clever but so predictable, and is the biggest beneficiary of yesterday's judgment:

1. All this puffery on Kyagulanyi yesterday comes at the background of most NUP bloggers saying that courts aren't independent, and that judge Musa Sekana was in a safe house where he is gonna release a judgment ending NUP. Guess what? Judge Sekana dismissed the case with costs, and , all over a sudden, courts are viewed as independent in Uganda 🇺🇬

2. The coming of NUP has,obviously, weakened other traditional parties in opposition , particularly FDC and DP. So, why would any clever politician wish to close such an organisation still doing a good job for him? Nobody kills a cat when there are still rats in the house. FDC seems to be still a force on the ground and they seem to be reorganising their troops, though they haven't suffered as much as DP in terms of major personnel to NUP. So it makes sense for Museveni to keep NUP around assuming Museveni was working with the petitioners.

3. I believe some illegality was committed during the change of leadership of NUP from Kibalama to Kyagulanyi. As far as I know, illegality is supposed to be addressed before anything else, but we didn't see that in the Sekana judgment. If the petitioners don't appeal against the Sekana ruling, then history will judge our justice system harshly. For arguments sake, let's assume that they later appeal , and the Sekana judgment is overturned, how would anybody turn around and say that courts aren't independent? Not even donors will dare do it!

Like I said, Museveni is the best strategist so far in our political history. There's no way such a judgment was passed without a back up plan. He's always planning something. I'm sure he's up to something! He is smelling a bone and therefore won't stop digging!