Huriwa Tasks Army To Fish Out Killers Of Peaceful Protesters In Lekki Lagos: 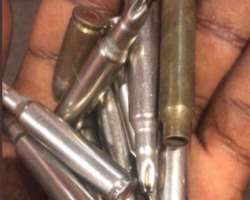 HUMAN RIGHTS WRITERS ASSOCIATION OF NIGERIA (HURIWA) is hereby tasking the military authority in Nigeria to fish out the operatives and the commander that led the troops to Lekki tollgate.,

These persons who shot at peaceful protesters even when they are totally unarmed and were chanting the National Anthem are terrorists of the worst kind and must be fished out and flushed out of the military institution before they degrade the professionalism in the Nigerian Army.

The soldiers who shot at the protesters must be investigated, arrested, charged and prosecuted.

It is imperative that these steps are meticulously enforced by the army because of the fundamental underpinning and the essence of the Geneva convention of 1949 which makes it incumbent that the Nigeria Armed Forces when deployed for either internal or external operations are bound by the laws of war and international law in the conduct of the operations. The laws regulate and limit the conduct of operations by acting as checks against arbitrary use of force. They are intended to minimize unnecessary suffering by combatants and non-combatant during war. The laws of war and international law are therefore sources of military law in Nigeria and include the following:1. The four Geneva Conventions of 1949; 2. The two Additional Protocols of 1977 to the Geneva Conventions 1949; 3. Multilateral and bilateral agreements to which Nigeria is a signatory and have bearing on military service or operations. 4. The decision of:(1) The International Court of Justice (ICJ) at the Hague(2) Ad hoc war crimes tribunals set up by or with the backing of the UN Security Council.(3) The International Criminal Court (ICC) at the Hague.

The two Additional protocols of 1977 to the Geneva conventions of 1949 are to supplement the 1949. Geneva conventions and modernize the laws of war. Protocol I deals with the laws of war international armed conflicts while Protocol 2 addresses the laws of war applicable in internal armed conflicts. It is noteworthy that the four Geneva Conventions and the two additional Protocols of 1977 have been formally given effect in Nigeria by the enactment of Geneva Conventions Act Cap G3 Laws of the Federation of Nigeria 2004. In sum, the conventions and Protocols which are now an Act of National Assembly, elaborately spell out the laws of armed conflicts on the use of force and legal implication of disregarding rules regulating the means and method of warfare, among other things. Specifically, section 3 of Act provides for trial and punishment for breach of the Geneva Conventions as follows: a) In case of grave breach involving wilful killing of a person protected by the Convention, sentence of death. b) In any other such grave breach, imprisonment for 14 years. We are making these demands knowing that the Nigerian Army ought to be a Professionally excellent Army. The direct shooting of unarmed peaceful protesters is therefore an act of TERRORISM. THE SOLDIERS AND THEIR COMMANDERS SHOULD NOT JUST FACE MARSHAL COURT BUT SHOUPD BE TRIED FOR ACTS OF TERRORISM AGAINST THE NIGERIAN PEOPLE.