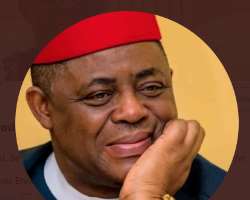 "To call for the end of Buhari means that you are trying to dig your grave and next week will be battle week. We will eliminate anyone that says or carries the sign of "end Buhari" within Abuja or elsewhere"- Maiwada A. Mohammed (maiwada_muhd), Twitter, 17th October 2020.

We deem them to be a clear and unequivocal threat to life and an ominous expression of intention to maim, kill and destroy those of us that believe that Buhari ought to resign.

Yet we are not intimidated and I take this opportunity to say it again loudly and clearly that the resignation of Buhari from power is the only way forward.

I say this because it is painfully obvious that
there can never be any meaningful reform of the police and security agencies and neither can #endsars truly occur and endure unless and until Buhari leaves power.

You cannot change the cruel mindset of an unforgiving, bitter, vengeful, bellicose, banal, unenlightened, insular and provincial 80 year old war veteran and General and the crude and thuggish thinking of a violent, vicious, retrograde, backward and oppressive antedelluvian dinosaur.

You cannot compel such a creature to reform the instruments of coercion which his very survival depends on.

As credible, laudable, vital, noble, necessary and important the #EndPoliceBrutality and #EndSARS protests and initiatives are to every right thinking, reasonable and rational person they are nothing but a mild irritation and meaningless slogans to a man who has not only proved to be totally deaf to the yearnings and blind to the sorry plight of his people but also a man who derives nothing but sadistic pleasure in watching his citizens and compatriots suffer and who has displayed nothing but repressive, oppressive, brutal and savage instincts and practices throughout his adult and public life.

Tyrants, whether democratically-elected or not, have little respect for the will of the people and do not bow to reason. They see these protests and these courageous young men and women in the streets as nothing but mere irritants with little more than nuisance value.

That is why a senior official in the Presidency can get on Channels television and say that these peaceful yet amazing demonstrations, which have rocked our nation and marvelled the world, cannot be properly described as real protests but rather just a small handful of people disturbing others in various cities throughout the country.

That is how deaf and dumb and how deluded and detached from reality Buhari and his men are. Some of them are even worse and are obviously suffering from an insatiable and psychopathic bloodlust.

They actually crave for the shedding and spilling of innocent blood and openly boast about it. These are the type that the Psalms describe as "evil and bloodthirsty men".

Possesed by evil spirits and propelled by dark forces, they are not only dangerous but they are also sociopathic in nature.

Worse of all they see the protestors as nothing more than "tiny ants", "filthy cockroaches" and "jobless miscreants" that need to be treated with "an iron fist", "wiped off the face of the earth" and "utterly crushed".

It is not rocket science to figure out that those that share this collectively morbid and malevolent mindset are not about to do anything reasonable or responsible or respond to the legitimate concerns that the good people of this country have about police brutality.

And just in case you have any doubts about this kindly consider the burning of the 200 cars which were owned by #EndSARS protesters in Apo, Abuja by pro-Buhari and pro-SARS rioters and hoodlums who are also busy killing, maiming, threatening and chasing #EndSARS protestors all over the city every day.

And in case that does not get you thinking consider the stage-managed prison break in Benin City and the sponsoring of thugs to infiltrate and cause trouble at #EndSARS protests in order to create the illusion of anarchy and justify the sending in of the military to "restore law and order" during which they will kill a whole lot of innocent people.

Simply put, Buhari's government would rather pay hoodlums and sponsor killer squads to attack the citizens they swore to protect than do the right thing!

In the light of all this please do not expect too much from Buhari and his team despite their promises of reform and change. The only changes and reforms they can offer are cosmetic in nature and meaningless and designed to create a false sense of reasonable behaviour, compromise and decency.

Yet the truth is that Buhari cannot be trusted and he would rather die than yield to those who are making these demands.

Only the gullible can be fooled by his strategy of "tell them what they want to hear but do as you please".

If you really want a new Nigeria or a restructured Nigeria where the rights of the people and the principle of self-deremination will be respected and where police and military brutality and savagery will come to an end and be a thing of the past then you must pluck up the courage to demand that Buhari must resign and leave office for his sheer insensitivity, his heartless impunity and his woeful failure of leadership and for the massive amount of innocent blood that has been spilt and brazen lawlessness that has been displayed under his watch.

Until that happens there can and will be no fundamental change and the brutality of the police and security agencies will simply continue.

Permit me to conclude this contribution with the following.

In 2014 Buhari asked President Jonathan to resign due to insecurity. In 2013 Buhari himself together with other leading members of the then opposition came out and marched in the streets against Jonathan.

No-one threatened them. No-one accused them of attempting to subvert the state or destabilise the country. No-one dismissed them with contempt or subjected them to insults, threats and brutal reprsisals.

No-one brought out thugs and miscreants to attack and kill them and burn their cars. No one opened the doors of the prisons and accused them of raiding and freeing prisoners.

No-one called them unprintable names and threatened to bring out troops on the streets to kill them. No-one threatened to wipe them off the face of the earth with an iron fist or turn the whole thing into a tribal war.

Those that say we have no right to say Buhari must resign due to the prevailing circumstances in our country have no right to tell us what to say or do and are nothing more than irreverent and intolerant beasts.

They have much to learn about the meaning and true nature of democracy, citizens rights and the freedom of speech.

There is nothing unlawful or irresponsible in calling for the resignation of a democratically-elected leader where and when he has failed.

When things go badly wrong a leader must be prepared to take full responsibility and tread the path of honor by stepping down.

This is especially so when sections of his security agencies have been turned into a deadly and ruthless gestapo which delights in killing innocent people, where law and order has broken down and where anarchy appears to prevail.

I advise those that spend their time threatening the rest of us and swearing to kill us for calling on Buhari to resign to stop stoking a fire which they may not be able to contain once it starts.

I counsel them not to spark off a massive and uncontrollable conflagration in our county which may well end up in a civil war and the final disintegration of Nigeria.

"Muhammadu Buhari is an agent of destabilisation, an ethnic bigot and a religious fanatic who, if given the chance, would ensure the disintegration of the country . His ethnocentrism would jeopardise Nigeria's national unity".

Tinubu's words were prophetic and he has clearly been proved right. Thanks to Buhari Nigeria is on the brink.

I close with the following. Emperor Haile Sellasi 1 of Ethiopia once said,

"Throughout history, it has been the inaction of those who could have acted, the indifference of those who should have known better and the silence of the voice of justice when it mattered most that has made it possible for evil to triumph".

This is true. We must shed all fear and continue to speak out and resist the tyranny, injustice and wickedness that thrives in our land lest evil triumphs.

That is our duty and calling as children of light and believers in God. That is the risk we must take and the price we have to pay for a better tomorrow. We are lions: we have no fear.

May the Lord guide, deliver, defend and help us and may His angels guard us jealously night and day.