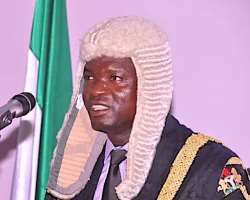 Ebonyi State House of Assembly has issued a 7-Day ultimatum to the National leadership of People’s Democratic Party ( PDP) to as a matter of public urgent importance zone the party's Presidential ticket to the South-East geo-political zone for the 2023 Presidential election.

Briefing newsmen in Abakaliki, Speaker, Ebonyi state House of Assembly, Rt. Hon Francis Nwifuru said the demand of the House was based on the principles of equity that governance has been anchored on.

The Speaker warned that if the request of the lawmakers is not adhered to, the members of the Assembly will take decisive action to ensure that justice was s done.

He also said that, the Honourable Members of the 6th Ebonyi State House of Assembly will leave no stone unturned in taking decisive actions to ensure that traditions and dividends of democracy are respected in our party.

The Speaker reiterated that since inception of democracy in 1999, the South-East has delivered landslide victory to PDP.

Hon Nwifuru emphasised that the South-East zone has formidable Presidential personalities that possess the pedigree and capability to occupy the number one position in the country.

He stated that they are not asking for what the zone does not have, so our party should not turn this request down.

On the rumored defection of the members of the State House of Assembly to the All Progressives Congress APC, Rt. Hon Nwifuru said that they are not defecting to any political party adding that the issue of defection has not arisen.

” In furtherance of this principles, we the members of the Ebonyi State House of Assembly call on the PDP to heed to the yearnings of the South-East that the position of the Presidential Candidate of the party be zoned to the South-East zone”

“PDP should not turn down this request, the 7-Day ultimatum to the party to convoke National Executive Council (NEC) and zone Presidency to South-East”

“We have serving Governors who are qualified , we only mentioned dignitaries that are not holding political positions, we are not asking for what we do not have”

The Speaker denied reports that the lawmakers have concluded plans to defect to the All Progressive Congress (APC) if the PDP fail to zone the Presidential ticket to the South -east zone.

“We are not talking about defection , if the party fails to adhere to our request. there are many options for us to take”

“We are members of the People’s Democratic Party (PDP), we believe in that party,

Speaking against the backdrop of perceived crisis between Governor David Umahi of Ebonyi State and Governor Wike of Rivers State, Hon Nwifuru debunked the insinuation.