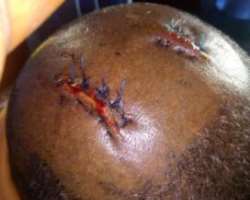 Publisher of an online newspaper Emeka Mama has escaped death from the hands unidentified attackers.

He was attacked at night at the gate of his Imufu, Enugu-Ezike country home while coming back from a nearby shop where he went to buy some items.

Mama, who recently retired as a senior editor at the Vanguard newspapers, is the publisher of the influential Southeast Post.

Our correspondent learnt that the attackers waylaid him while he was entering his house and hit him severally on the head.

The veteran journalist, who made his mark as courageous investigator, passed out and was left for dead by the vicious attackers.

When contacted him, Mama narrated his chilling ordeal in the hands of the attackers.

“It happened on October 12, 2020 in front of my house. Two young boys came from nowhere as I was trying to open my gate at about 8.30 pm and hit me severally on the head, ” he said.

Our correspondent further learnt that he had left hospital where he was rushed to for treatment and the matter had been reported to the police, who are already investigating.

The Rainbow could not reach the Police Public Relations Officer for Enugu State, Mr. Daniel Ndukwe, for confirmation before press time.