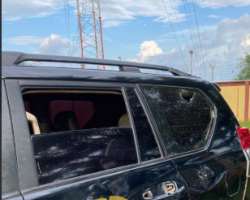 The Union of Democratic Forces in Osun State has condemned Saturday’s attack on the convoy of Gov. Gboyega Oyetola.

Union of Democratic Forces, in a statement issued by its Coordinator, Wole Adedoyin on Sunday in Ilesha, described the action of the group as heartless, unacceptable and barbaric.

It would be recalled that some unknown thugs attacked Governor Gboyega Oyetola while he was addressing protesters in Osogbo on Saturday. It was gathered that Oyetola had walked along with some End SARS protesters from Oke-fia to join others at the popular Olaiya junction. As he also apologised to the youths for coming late to address them. The governor said he was out of the state but had returned about an hour ago to join them in solidarity.

Wole Adedoyin who is also the Chairman of the Hope Democratic Party (HDP) and the Association of Progressive Political Parties (Osun APPPS) in Osun State urged the people of the state to respect leaders at all levels, noting that the only way the state could be prosperous was to embrace dialogue, peace and unity.

“This regrettable attack shows the desperation by enemies of peace and humanity at large to jeopardise all efforts towards making life easier for victims of Police brutality in the state over the years. The Union of Democratic Forces strongly condemns this attack and stands with Gov. Gboyega Oyetola who has shown sympathy and courage in joining the EndSARS protest and personally reaching out to the victims of police brutality in the state. We urge the governor not to be deterred as he keeps working with security agencies to protect the lives and property of the people,” he said.

Adedoyin further advised the Inspector General of Police and an appropriate authority to bring the perpetrators of the act to book as he pointed out that the attack on the executive governor of the state was political.

According to him, the perpetrators of the uncivilised act must face the wrath of the law.