I Support Nigerian Youths With Their Demand To Reform Nigeria 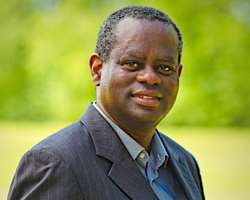 Silence right now is not a solution and it is not golden. We need to join forces and lock arms with the Nigerian youth for finally speaking out and demanding for a change in Nigeria.

I know for sure that parents are not happy with the situation of their youths. In whatever capacity, if you still have children from 18 years of age and above, waking up each day to see them knowing how frustrated, disappointed and confused that their future is compromised. As bad as the situations are, you now have all forms of injustice against the common people of Nigeria. The youth make a majority of the population. A nation that ignores its youth has no future and bound to fail soonest.

Nigeria is at that cross road. I call on the Nigerian youths to remain peaceful in their conducts and remain resolute in their demands. I will join forces with those of like minds outside the country to push for a national reform in Nigeria.

I have been getting phone calls to do something and help to facilitate the cries of the youths of Nigeria. Definitely, I will do that in my own little way. In my youth at 25, I joined in the demand for our democratic rights to be respected after the annulment of June 12 1993. I was harassed, chased around in Lagos, finally arrested, detained and draged to court for treason, an offence punishable by death if found guilty. Many did not join the struggle because they thought we were crazy to make such demands. In 2020, the youths have realized that nothing would change if they do not take matters in their own hands. The protest will gradually dissolve into a revolution if you do not give up to blackmail, intimidation and fear of arrest or death. Aim at occupying the National Assembly and the government will collapse. Buhari cannot do anything when there is no parliament to back him up. The first thing he did after his re-election was to install his cabals in the National Assembly. A national call for the dissolution of the National Assemble is the way forward.

The Police, Army, Navy, Air force are relying on their youthful forces to terrorize Nigerians but very soon they will join the side of the common people. Majority of them are not better-off with their service condition and living condition.

Let the struggle continue, we did in our time but we could not gather the support. Now the support is naturally coming to them because what is developing is a mass movement, you cannot crush it with force except to listen to them.

Nigerian youths, I support you AND I stand with you. No gain without pain.

God bless the Nigerian youth and protect them from the hands of the evil ones in Nigeria.