Request For Support For The #endsars Movement/protest 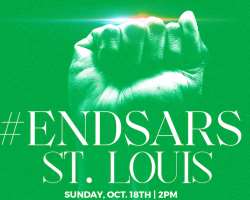 We write this letter collectively as representatives of Nigerian youths in the St. Louis area, requesting for your support in regards to the disbandment of a dreadful Police Force Unit in Nigeria responsible for several police brutalities all over Nigeria. Your support is in addition to the protest we have scheduled to make our intentions and voice known as regards this issue.

For context, we thought we should commence this letter with a quick summary of the subject that our concern and (planned) protest is concerned. The subject is a special carve-out of the Nigerian Police Force in Nigeria called SARS (an acronym for “Special Anti-Robbery Squad”). Created in 1992, this police force unit has refused to carry out its mandate that could easily be deduced from the full meaning of its acronym – which is to respond to on-going robberies (where perpetrators are armed or unarmed). Instead, and recently the group has resorted to engaging in several egregious activities such as extreme profiling of Nigerian youths (often informed by the youths' appearance where they appear "flamboyant" in their dressings, hairstyles, electronic gadgets they possess, cars, etc). This profiling (which occurs on every Nigerian street) often morph into extortion, torture, framing, blackmail, and sometimes death by gunshot wounds inflicted by this group of police officers.

The continuous horrendous actions of SARS spiraled recently with the killings of almost 8 youths in the South-Western parts of Nigeria for obvious reasons for which SARS is known for. One notorious fact is that almost every Nigerian youth living in Nigeria (or has moved outside of Nigeria) has had at least one encounter (or know someone who has had an encounter) with SARS. The encounter is always marked with the same technique, they profile the youths, instill fear in them using their weapons, then extort them, and where they refuse or do not have money, they are shot dead by SARS. The incessant killings and extortion have reached its zenith, and that is the rationale behind the (now) world-conscious protest going on as propagated by the Nigerian youths – locally and internationally.

We, as Nigerian youths, in the diaspora (in the St. Louis and neighboring areas) have also resolved to add our voice to this ongoing protest. We have scheduled Sunday, 18th October 2020 for a protest in downtown St. Louis, we have made contact with necessary media houses to cover our movement, and sought relevant permits to carry-out the protest.

We are writing your office to give you an overview of the actions of this horrific group of police officers called SARS, and especially to castigate their actions while asking for their immediate disbandment as they have continuously re-affirmed that they are a parasite to the Nigerian young community. We also plead that your office help in using its official capacity to help relay this message to the right offices to better put our message before the world, to compel the Nigerian government to not only disband SARS but to refrain from a reformation of SARS under the guise of a different name.

We sincerely anticipate your support. Yours sincerely,