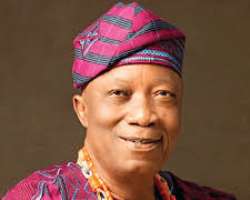 "Be merciful to those on earth and the One in the heavens will have mercy upon you".

--Tirmidhi 1924
The philanthropic gestures of Sir Kesington Adebukunola Adebutu to educational institutions are legendary and there for all to see. Conspicuously, one can describe the legend as a believer, a supporter, a cheerleader, a friend, a loyalist and a cheerful giver who is committed to empowerment and giving back to society.

The quote above reflects the philosophy of Adebutu in heavy investment in people, in giving, in charity and in deriving satisfaction by so doing. The illustrious gentleman from Iperu in Ogun State, has meaningfully touched lives of the young, the old, men and women whose luck has attracted them to his philanthropy.

His foundation, Kesington Adebukunola Adebutu Foundation(KAAF) apart from donating buildings and equipments particularly to educational institutions in Nigerian, has been used to empower many lucky youth.It is instructive to also reiterate here (because it is already on record) that in his generosity and vision to immortalise his name, Sir Kesington Adebutu heartily donated a state-of -the -art library to the prestigious Crescent University, Abeokuta in 2009, at a time the institution was grappling with the National Universities Commissions (NUC) accreditation. Adebutu desired that the edifice be named after his late unlettered mother.

As a true philanthropist, Sir Kesington Adebutu does not discriminate in his charity. He is open- hearted in doing so. To him, humanity is one and not measured from Christianity, Islam, Hinduism, Idol-worshipping or Atheism. His compass of human measurement remains kindness and support to fellow humans irrespective of their background, religion or race. He is kind-hearted and socially responsible. His world view manifests that he abundantly uses his endowed wealth to develop the human capital. This is all over the walls of history. For instance, Adebutu's mother was and died a Muslim but of his own volition, he chooses to practise Christianity. Fantastically, Baba is a bridge-builder whose network of friends and associates cuts across all 'divides'.

Judge Ajibola, founder and proprietor of Crescent University, Abeokuta was not ungrateful to have written a testimonial on the 18th October, 2010 about Sir Adebutu in the following words:

"Some years ago when Crescent University was in the grip of financial constraint and I had to scout for people to assist and support us financially, I decided to write letters of appeal to many of our affluent friends all over Nigeria. Most unfortunately, the response was terribly poor and indeed very few donated very little.

"Fortuitously, however, it so happened that on the occasion when Kesington was launching his endowed science laboratory at Moshood Abiola Polytechnic, he specifically invited me to the occasion. As I sat by him, something kept urging me to request for an endowment to our university too since we were eagerly looking for someone to endow us with a library.

"Finally, I screwed up my courage by placing the proposal before him for the endowment of our library. He agreed to do something unhesitatingly and with alacrity. He then asked me about the rough estimate which I said could cost between Twenty-five to Twenty-seven Million Naira. On that day, he was called upon to launch the endowment, he came with a cheque of Twenty-seven Million Naira with which we have accomplished our mission of building the new library that we are commissioning today.

"This definitely explains why library we are commissioning now is named after his mother, Late Alhaja Seliat Olasimbo Adebutu".

Gratifying news to the founder and Crescent University community since an ultramodern library such as Seliat Adebutu Library is a prerequisite to resource verification and accreditation of university programmes.No successful accreditation by the National Universities Commission (NUC) could take place without a library of such standard.

Apart from further financial assistance he gave to Crescent University, Sir Adebutu had meritoriously served on the governing council of this academic centre of excellence in Nigeria.In recognition of his laudable achievements in business and education in Nigeria, he was also honoured with a Doctor of Science honoris causa in Business Administration. It is therefore apposite to say that history of the Academic and Moral Excellence of Crescent University, Abeokuta is not complete without Kesington Adebutu as a complete chapter in philanthropy. Although hundreds of beneficiaries and institutions have sweet tales to tell, each time the success story of this leading private university is told, Sir Adebutu remains one of those personages whose names reverberate in our archival records.

We heartily congratulate Sir Kesington Adebukunola Adebutu on the auspicious occasion of his 85th birthday this month. We wish him more years of grace. Many were called but only few responded.

Like the precious stone, Sir Adebutu has honorably exhibited rarity and thus, has succeeded writing his name in gold.In our estimation, he is our precious diamond forever.On behalf of the Vice Chancellor, Professor Ibraheem Gbajabiamila, we congratulate Sir Adebutu on this milestone.

* Katib, a PR and Advertising scholar, writes from Crescent University, Abeokuta, Nigeria and can be reached via [email protected]/+2348096629914