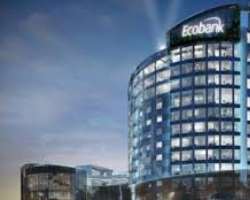 Lagos, October 13, 2020 – Ecobank Nigeria has rewarded its Agency Banking partners, also known as Xpress Point Agents across the six geo-political zones of the country with mouthwatering gifts for their performances from January to September 2020. This reward is coming ahead of the Ecobank Vanguard Digital financial inclusion summit bringing together stakeholders in the digital financial inclusion space in Nigeria. Announcing the rewards in Lagos, Nike Kolawole, Head, Agency Banking, Ecobank Nigeria said it was expedient to recognize and reward agents across the country for their tenacity, also knowing that they are helping to drive the Ecobank’s financial inclusion strategy in Nigeria. She noted that the agents are already commending the bank for the gesture.

According to Kolawole, a total of 18 agents were selected across the geopolitical zones of the country based on their transaction counts and value from January – September 2020, adding that the winners were rewarded with 40 inch televisions while second and third winners went home with refrigerators and generating sets, respectively. She added that the aim of the Xpress Point is to let every Nigerian and household have access to Ecobank services within their neighbourhood to provide easy banking services.

“We are happy with our Xpress point agents, knowing they are playing a critical role in helping us reach out to the unbanked and underbanked in the society. They are bringing more people to the banking space through their services. They carry out financial transactions on our behalf and earn commission on every transaction processed. The consumer experience is very good as customers can do simple deposit, payment and transfers in their own neighbourhood rather than travel for hours to a bank branch. The Xpress Point is also a channel that is also being used for the deployment of national social intervention programmes of the government,” she said.

Kolawole listed the services offered by the Xpress point agents as; cash in, cash out, fund transfer, bills payment, airtime recharge, remittance and account opening, among others. She added that the services are available for “sole proprietors, partnerships, co-operative societies, microfinance banks, companies with large distribution network – like petrol stations, FMCGs, telecommunication companies, super agents, aggregators and unregistered businesses such as petty traders, hair saloon and others. Most of the agents that benefited from the reward scheme expressed appreciation to the bank with a promise to contribute more to the agency banking of the bank”.

On the Digital Financial Inclusion Summit slated for the 21st of October, Kolawole said she was excited as the timing is pertinent, as Ecobank across Africa is determined to take banking to the populace. She noted that the agency banking scheme for instance is helping to build entrepreneurs and push financial inclusion to the large unbanked and under-banked population. “These are all parts of our efforts as a bank to help more Africans embrace entrepreneurship as best strategy to tackle poverty and address growing unemployment. As the Pan African Bank we are certain in our determination to take banking services to every citizen, no matter their location and financial ability”. She stated.

Ecobank boasts of a bouquet of digital channels comprising solutions aimed at delivering convenient, accessible and reliable financial services. The USSD platform, *326#, makes it possible to open an Xpress account and Xpress Save account instantly. The bank’s mobile banking app, Ecobank Mobile offers the option of generating a virtual card; this comes in handy as customers are continually turning to web payments for their shopping. There is the Ecobank virtual card, which offers the flexibility and convenience of creating a shopping card that is not linked to a customer’s account but is fully capable of carrying out online payments. The virtual card can also be shared with loved ones as a gift card for their own shopping.