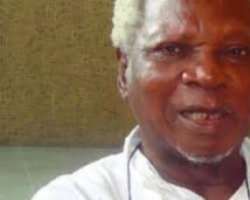 He died in the early hours of Tuesday, according an announcement by his family.

A contemporary of the Late Chinua Achebe and Nobel Laurrette , Professor Wole Soyinka, JP Clark was a prodiguous writer whose work spanned all the genre of literature including the popular , Their America, Song of a goat, A reed in the tide, Ozidi among others . His work casualties became a major literary piece at home and abroad.

He was educated at Universities of Lagos , Ibadan and Princeton ,USA . He was 85

The Announcement by his family reads,
“The Clark-Fuludu Bekederemo family of Kiagbodo Town, Delta State, wishes to announce that Emeritus Professor of Literature and Renowned Writer, Prof. John Pepper Clark, has finally dropped his pen in the early hours of today, Tuesday, 13 October, 2020.

Prof. J. P. Clark has paddled on to the great beyond in comfort of his wife, children and sibbling, around him.The family appreciates your prayers at this time.Other details will be announced later by the family.”

In his memory , his poem , Casualties ( on the evil consequences of the Nigerian Civil war 1967-70) is reproduced below :

The shattered shall become prisoners in
A fortress of falling walls.
The casualties are many, and a good number as well
Outside the scenes of ravage and wreck;
They are the emissaries of rift,
So smug in smoke-rooms they haunt abroad,
They do not see the funeral piles
At home eating up the forests.
They are wandering minstrels who, beating on
The drums of the human heart, draw the world
Into a dance with rites it does not know.
The drums overwhelm the guns…
Caught in the clash of counter claims and charges
When not in the niche others left,
We fall.
All casualties of the war.
Because we cannot hear each other speak.
Because eyes have ceased the face from the crowd.
Because whether we know or
Do not the extent of wrongs on all sides,
We are characters now other than before
The war began, the stay-at-home unsettled.
By taxes and rumours, the looters for office
And wares, fearful everyday the owners may return.
We are all casualties,
All sagging as are
The cases celebrated for kwashiorkor.
The unforeseen camp-follower of not just our war.