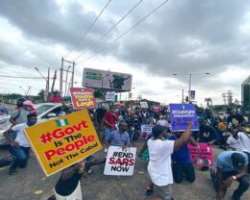 The Commissioner, Lagos State Police Command, Hakeem Odumosu, has confirmed that some armed protesters laid siege to the Anti-Kidnapping Unit Office of the Command in Surulere, broke into the cell and liberated two of the kidnap cases suspects, before they were tactically and professionally repelled.

The CP spoke on Monday shortly after the #EndSARS protest turned violent in the state.

The protest, which started peacefully, turned violent shortly after it was due to have ended and the leaders abandoned the roadblock mounted for the purpose.

One of the leaders of the protest, Oguntoyinbo Olanrewaju, in a writing, titled: “SURULERE #ENDSARS PEACEFUL PROTEST: SETTING THE RECORD STRAIGHT,” wrote: “Yes, on Monday 12th of October, 2020 I joined some youths at Shitta roundabouts demanding affirmative words from Mr. President that indeed the Special Anti Robbery Squad SARS a unit within the Nigerian police force has been disbanded as announced by the Inspector General of Police.

“This demand was necessitated because severally we have had similar calls by the IGP.

“Getting to Stadium we saw police officers, and we knelt down to show sign of respect that we are doing a peaceful protest. They told us to move on peacefully and indeed followed us behind and monitoring activities.

“When we got to Hogan Bassey junction, because the protest has no leader (so we won't be carrying out some people's hidden agenda) some boys tried to enter SARS offices there but we shouted at them that we should keep going.

“Getting to Area C, the Assistant Commissioner of Police came down to address us. I was chosen to speak on behalf of the protesters and I told him why we were protesting; because of the harassment and brutality from police especially from SARS unit and we want Mr. President to confirm that indeed SARS has been disbanded. Then reform police.

“He spoke with us in a friendly manner and promised to take our agitation to his superiors. And he advised we should be law abiding. In fact, he promised that if any of us is harassed by the police we should call him which we applauded him for.

“This time the Ikorodu Road was barricaded already and we agreed that by 12noon we shall open the road for easy flow of traffic.

“While we were playing and singing solidarity song, one fair guy arrived with his crew they said his name is Oxlade.

“This dude started going about making videos and running around. When it was 12noon, I called the other guy whom we were kinda coordinating things together that we should open the road… 5 cars had past going towards Jibowu then he asked me to go to the other side and open those going to Costain.

Then those guys that arrived with Oxlade said no. That it should be one o'clock. Haba, we agreed twelve. I went back to the other lane it was shut again.

“The guy said majority said one o'clock again. We waited and trying to coordinate things. By one o'clock let's open, they said no.

“Then I saw a video online where Mr. President gave a speech confirming that indeed SARS has been disbanded. I showed them the video that it is over and me I have achieved what I wanted to achieve.

“They were insisting that not yet time to go. Haba, 12 to 1 pm… 1 pm to no time. I took bike and told them I am done with the protest.

“Getting home, bathing and eating then decided to check my phone where I read they were gun shots in Surulere after some youths attacked SARS office on Hogan Bassey.

“Like seriously? They left Area C to return to Hogan Bassey to attack SARS? How come?

We must learn when to stop. Especially when our demand has been met. It is indeed a horrible outing for those that returned to Hogan Bassey.”

That attack led to the death of Inspector Erinfolami Ayodeji with AP No 229241, while Inspector Ekei Joshua, with AP No 175493, and Inspector Peter Agabi, with AP No 251138, attached to the Anti Kidnapping Unit of the Lagos State Police Command, located at Iyun Road, Surulere.

The injured policemen are receiving treatment at the Intensive Care Unit of the Lagos State University Teaching Hospital.

In addition, the protesters fired and killed one Ikechukwu Ilohamauzo, 55, a driver of one Toyota Sienna Bus, with Registration Number LSD 296 FX, who got stuck in the traffic caused by the blockage of the road by the violent protesters in Surulere.

Four suspects have been arrested in connection with the incident.

Odumosu has ordered the Homicide Section of the State Criminal Investigation Department, Yaba, Lagos to carry out thorough investigation into the incidence for further police actions.

Odumosu has urged protesters to be peaceful and avoid violent attacks on police personnel or any other security agents.

He also warned them not to harass innocent Lagosians by forcing them to join the protests and should avoid blocking access routes or roads for other Nigerians who are as well entitled to their fundamental human rights.

He also appealed to parents and guardians to keep watch on their children and monitor their activities to avoid being mobilised and used for illegal activities in the state.