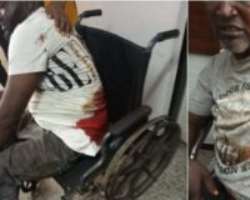 One policeman has been killed and two others hospitalised in Surulere area of Lagos, Southwest Nigeria as the #EndSARS protest turned violent.

The peaceful protest turned something else when the police allegedly shot one of the protesters dead.

Some of the protesters were said to have attacked the Surulere Police Division with three policemen seriously wounded.

A top police chief disclosed that one of the police officers has been confirmed dead, while two others were still in critical condition at the hospital.

The intestine of the dead police officer gushed out.

The violence began following alleged shooting of protesters by the police in Surulere, in which one of them later died despite attempt to revive him.

The angry #EndSARS protesters were said to have gone on rampage and attacked the police station – The News.