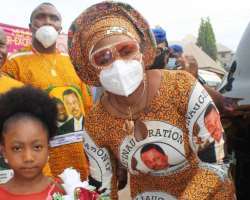 The beneficiaries who converged at the Councils' headquarters of Ogidi and Ojoto respectively, included: widows, children, the aged and the physically challenged who were selected from each of the seventeen towns under the two Local Government Areas. Mrs Obiano, who is the founder of the charity organization, Caring Family Enhancement Initiative (CAFE), in her speech said that she braved the threats of Coronavirus to undertake the visits and share the palliatives because she recognised the difficulties faced by the beneficiaries, and so undertook to do whatever she could to ameliorate their plight.

The palliative support which has been the high point of the annual visit over the past six years, became more crucial this time due to the ravages of COVID-19 which has brought severe economic toll on people, especially the indigent. The wife of the Governor observed that the visits have become part of her yearly routine that cannot be changed by any circumstance, stressing that she would continue to touch people's lives beyond the tenure of her husband in office.

Osodieme appealed to the Transition Committee Chairmen of various Local Government Areas, traditional rulers and President Generals of the town Unions to collate and send names of people that would be trained on new skills and empowered by her NGO and send to her office for onward processing. The members representing Idemili North and South at the Anambra State House of Assembly Hon Ifeanyi Chiekwu and his Idemili South counterpart, Hon Chuka Ezenwunne, commended the governor's wife for sticking to her passion for the downtrodden even at a period of global economic hardship.

Speaking at Ogidi, the Special Adviser to the Governor on Political Matters, Chief Ifeatu Obi-Okoye, said that the annual tour by the governor's wife, teaches humanity the essence of love and deep compassion devoid of political gains. Beneficiaries
Speaking in the same vein, the Managing Director and Chief Executive Officer of Anambra Small Business Agency (ASBA), Sir Clement Chukwuka, said that Mrs. Obiano drives empowerment of women and urged the people especially women to band together as Cooperatives in order to take advantage of the various loan and grant packages currently being managed by the agency. Palliative items
The Transition Committee Chairman of Idemili North, Hon. Barrister Asha Nnabuife, praised the tour for having significant effect on social and grassroots mobilization in the state. His Idemili South counterpart, Hon. Dom Unachukwu also commended the Wife of the Governor, adding that through her charity works she has made selfless giving an art.

Kindly note and correct my mistake in the caption of pix4 ( caption 3 was repeated, it was my error).