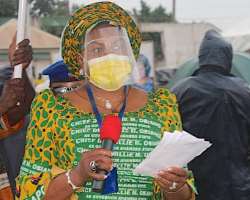 The Wife of the Governor of Anambra State and founder of Caring Family Enhancement Initiative (CAFE), an NGO, Dr (Mrs)Ebelechukwu Obiano (Osodieme) has said that her husband, Chief Willie Obiano, is determined on completing ongoing projects in state, espcially roads.

Mrs Obiano gave the assurance, Thursday, during her visit to Aguata and Anaocha Local Government Areas in continuation of her 2020 tour of the twenty-one Local Council Areas of the State. The governor's wife said that arrangements have been concluded for contractors to go back to site once the rains stop. According to her, " I have the assurance of our governor that all roads awarded in parts of the state would be completed. Also to be completed are the Awka City Stadium and the International Cargo Airport. Both projects would completed on schedule and before the expiration of the tenure of this administration."

She stated that the governor would continue to work in the best interest of ndi Anambra and appealed to transition Committee Chairmen, community leaders, to always forward reports of roads that need attention in their areas through the appropriate channels for repairs. Mrs Obiano added that she embarked on the tour despite the stebacks by Coronavirus so as to assuage the sufferings of the less privileged in the communities as well as fulfill her obligations to God through service to others.

Welcoming the wife of Governor to his Constituency, the Member Representing Aguata Constituency at the Federal House of Representatives, Hon Chukwuma Umeoji, extolled Mrs Obiano's philanthropic which she does through her NGO, CAFE. " Osodieme carries out corporal work of mercy and has therefore fulfilled both religious and social obligations by setting a standard in both leadership and service alongside her husband, our Governor." Earlier in their remarks, Member Representing Aguata 1 and Aguata 2 at Anambra State House of Assembly, Hon Nnamdi Umeh, and Hon Okechukwu Okoye, and their Anaocha Constituency 2 counterpart, Hon Ejike Okechukwu, praised the commitment to charity and selflessness exhibited by Mrs Obiano wherever she visits.

Also speaking at Aguata, Anambra State Commissioner for Public Utilities Engineer Emeka Ezenwanne, said that Mrs Obiano lives by Biblical standards and has written her name in the sands of time. At Anaocha, the Commissioner for Justice and Attorney General, Anambra State, Dr Uju Nwogu said that Mrs Obiano exemplifies St Mother Theresa in the way she cares for the needy. She assured her that the Local Government is the home of All Progressives Grand Alliance (APGA) and that they will continue to support the Governor and his team. Welcoming Mrs Obiano in Aguata and Anaocha on behalf of the beneficiaries of the palliatives, Commissioner for Women and Children Affairs, Lady Ndidi Mezue said that they could not thank her enough for her care for the less privileged.

The Transition Committee Chairman of Aguata local government area, Dr Eche Ezeibe, said that the Governor's wife who recently completed and handed over a bungalow to a poor widow in Igboukwu, has set an example of what the meaning of charity is. Hon Ezeibe also presented a birthday Cake to the Governor's wife and thanked her for defying the heavy rains to visit the Local Government. His Anaocha counterpart, Mr Patrick Onyedum, equally described the Governor's wife as a role model for many living on charity. The high point of the tour was the distribution of palliative support to indigent widows, the less privileged, the physically challenged and other poor persons selected from all the twenty-four communities under the two Local Government Areas.