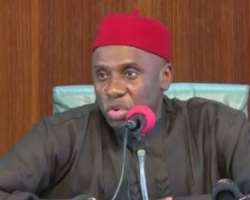 The Federal Government has approved Executive reconstruction and rehabilitation of the Port Harcourt-Maiduguri Eastern Narrow Gauge.

The project which will cost $3.02b received the nod the Federal Executive Council during the meeting on Wednesday.

Minister of Transportation, Rotimi Amaechi, told State House correspondents at the end of the meeting at the Presidential Villa, Abuja, that the council approved the construction of a deep seaport at Bonny and a railway industrial park in Port Harcourt at a cost of $703.1m.

Amaechi said however that the two projects would be at no cost to the Federal Government, saying they would be funded through Public-Private Partnership arrangement.

According to him, $241.2m will be spent on the industrial park while the Bonny Deep Seaport will gulp $461.9m.

“The Federal Executive Council has approved the award of contracts for the rehabilitation and reconstruction of the Port Harcourt-Maiduguri eastern narrow guage railway, with new branch lines and trans-shipment facilities,” he said.

“There is another connecting to narrow gauge to standard gauge at Kafanchan. There is a branch line from Gombe or before Maiduguri to Damaturu and Gashau.”