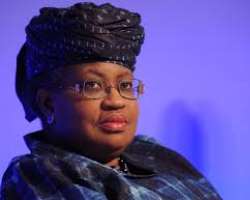 Representatives of countries in the European Union have agreed to support Ngozi Okonjo-Iweala, Nigeria's candidate for the World Trade Organisation director-general position, Bloomberg is reporting.

At present, the eight candidates that expressed interest in the WTO job have been reduced to five candidates by WTO members countries.

The second phase of consultations which began on September 24 will end on October 6.

During this time, members will be asked in the confidential consultations to express two preferences to the facilitators thus reducing the number of candidates from five to two.

Other candidates in the race are Amina C. Mohamed of Kenya, Mohammad Maziad Al-Tuwaijri of the Kingdom of Saudi Arabia and Liam Fox of the United Kingdom.

Jesus Seade Kuri of Mexico, Tudor Ulianovschi of Moldova and Abdel-Hamid Mamdouh of Egypt were eliminated from the process.

It is expected that the next WTO DG will be announced on November 7.

Egypt and the AU's Office of Legal Counsel had opined that Okonjo-Iweala's nomination violated the candidature guidelines provided by the AU.

However, the WTO clarified that the former World Bank managing director is eligible to run for the office.

Okonjo-Iweala, who currently chairs the Global Alliance for Vaccines and Immunization (GAVI) backed by the Bill Gates Foundation.