How Accountant General Of The Federation Can Prevent Public Sector Economic Crimes Through Technology- By Huriwa: 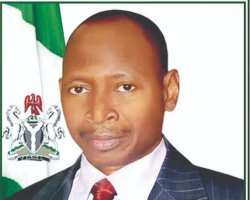 A Statement By The Prominent Civil Rights Advocacy Group-: HUMAN RIGHTS WRITERS ASSOCIATION OF NIGERIA (HURIWA) on How The Office of The Accountant General of The Federation can prevent PUBLIC SECTOR CORRUPTION and how The Lack of National Procurement Council is Aiding and Abetting Corruption In Nigeria, While Calling on The Federal Government To Support The Relevant Anti-Corruption Bodies Through Provision of Necessary Authority and Funds to See to Convictions of Offenders. The need for a non-serving/retired police officer as substantive Chairman of the Economic and Financial Crimes Commission (EFCC) is extremely urgent just as the Rights group said the Justice Ayo Salami led investigative panel on the monumental proportions of corruption in EFCC under the long suspended Chairman Ibrahim Magu must wind up immediately and the recommendations implemented forthwith:

THE ISSUE
There is an increasingly public outcry with respect to mismanagement of public funds, embezzlement on the part of government officials, high recurrent expenditures, and poor budget performance by the various governments in Nigeria since 1999.

According to the report by Transparency Initiative, Nigeria has continued to be rated amongst the most corrupt countries in the world for many years consecutively since 2001 due to the collapse of public sector accountability.

As a result of the increasing financial scandals and public agitation of the inability of the executive arm of government under President Muhammadu Buhari to turn things around, demand for greater accountability and transparency in the public sector has been on the increase

First, the absence of the National Council on Public Procurement has weakened public engagement and involvement in the procurement process being the focal point of corruption in the public service.

It has also eroded and relegated to the background its core function of regulating the activities of the Bureau of Public Procurement responsible for monitoring and over-sighting public procurement and harmonization of existing government policies and practices.

The National Assembly passed into law, the Public Procurement Act 2004 CAP P44 Laws of the Federation of Nigeria with commencement in 2007 and several amendments thereafter, and the latest amendment being promulgated by the Nigeria President on May 22, 2019 to take effect on May 24, 2019 with accompanying amendments.

Section 1 of the Public Procurement Act, 2007, provided for the establishment of the National Council on Public Procurement to supervise the activities of the Bureau of Public Procurement and carry out other functions such as to consider, approve and amend the monetary and prior review thresholds for the application of the provisions of this Act by procuring entities, consider and approve policies on public procurement.

Also, approve the appointment of the Directors of the Bureau, receive and consider, for approval, the audited accounts of the Bureau of Public Procurement, approve changes in the procurement process to adapt to improvements in modern technology and give such other directives and perform such other functions as may be necessary to achieve the objectives of this Act.

Sadly, this legal requirement and milestone to help check fraudulent practices in the award of public contracts through inflation of contract costs, poor project prioritization, poor budgeting process, and other manipulations of procurement and contract award processes has yet to be enforced by government, but has been usurped by the Federal Executive Council.

Secondly, it’s IMPERATIVE that the accountant general of the federation adopts as a critical aspect of his mandates the PREVENTION OF PUBLIC SECTOR CORRUPTION AND CRIMES WHICH ARE DESTROYING THE RUNMING OF AN EFFICIENT AND AN EFFECTIVE PUBLIC SERVICE IN NIGERIA. THE ACCOUNTANT GENERAL OF THE FEDERATION WE UNDERSTAND HAS ACTIVATED CERTAIN INFORMATION TECHNOLOGY DRIVEN INITIATIVES TO MONITOR FINANCIAL TRANSACTIONS OF THE FEDERAL GOVERNMENT BUT WE ARE BY THIS MEDIUM URGING HIM TO STEP UP THE INITIATIVES OF ADOPTING TECHNOLOGY TO WAGE A DETERMINED CRUSADE AGAINST PUBLIC SECTOR CORRUPTION AND THE EMPHASIS IS NOT ON EXPOSING CORRUPR ACTS AFTER THEY HAVE HAPPENED BUT STRATEGICALLY TO STOP AND PREVENT PUBLIC SECTOR AND ECONOMIC CRIMES FROM EVER HAPPENING AS ARE DONE ALL OVER THE ADVANCED SOCIETIES OF THE WORLD. For the purpose of clarity, the Accountant General of the Federation is the head of the Federal government accounting services and Treasury.

The office holder has the responsibility of providing adequate accounting and controls in the Ministries, Extra Ministerial Offices and other arms of government. As the Chief Accounting Officer of Nigeria, the office golder is un charge of the receipts and payment, he is saddled with the responsibility of general supervision of the accounts of all ministries and departments within the federation, and prepares the annual financial statements of account of the nation, as may be required by the Ministry of Finance.

He or his representative has access at any reasonable time to all documents and other records that are related to the accounts of every Ministry or department and he is entitled to obtain information necessary for the proper performance of his duties. We are therefore appealing to him, being a highly respected accounting officer and technocrat, to device fool proof processes of tracking the movements of all finances of the public sector so as to PREVENT THE OCCURRENCE OF ECONOMIC CRIMES BY DIRECTORS GENERALS AND MINISTERS BEVAUSE OT WILL BE CHEAPER TO STOP CORRUPTION FROM HAPPENING THAN FIGHTING IT AFTER THE CRIME HAS BEEN PERPETRATED. THE OFFICE OF THE ACCOUNTANT GENERAL OF THE FEDERATION SHOULD BE INSTITUTIONALLY MADE AN ANTI-GRAFT ARM OF MR PRESIDENT'S OFFICE GIVEN THAT THE FIGHT AGAINST CORRUPTION IS THE PIVOTAL ROLE OF THE ACCOUNTANT GENERAL OF THE FEDERATION.

RECOMMENDATIONS AND DEMANDS:
If the powers and functions of the Accountant General of the Federation are professionally implemented and enforced, public sector corruption, which is destroying Nigeria will abate.

In recognition of this, we call on the current Accountant General; Mr. Ahmed Idris to up his game in additional to other measires he has rightly put in place which we are aware of and he needs to effect mechanics and methodologies of checking public sector corruption including the extensive abuses by Directors Generals of the rules governing transactions of government and mandate all payments to be made to the Treasury Single Account TSA.

Undesirably, several government Agencies such as the Nigerian Port Authorities still allegedly operate bank accounts outside of the Treasury Single Account. By December this year, we will be publishing the BLACK BOOK OF ROGUE MINISTRIES AND MDAs.

Additionally, section 5 (3), states that the Bureau shall formulate the general policies and guidelines relating to public sector procurement for the approval of the Council. Hence, the absence of a substantive Council has made these very important functions to be at the behest of the Federal Executive Council.

Believing that the National Council on Public Procurement, which will be made up of men and women of proven integrity will ensure due process in the award of contracts, eliminate corrupt practices in the procurement process, we demand that a proper constitution and inauguration of the Council be put in place to further strengthen and institutionalize the fight against corruption which has become a recurring decimal and a draw back to the development of Nigeria.

Another area that has promoted corruption in Nigeria is the insensitivity of Nigerian leaders to the plight of the populace. The Nigeria populace are neglected by the leaders. A good number of Nigeria leaders amass wealth by embezzling money meant for the constituency and they deprive the electorates from benefitting from government.

The representatives of the electorate sit in the Federal Capital Territory, Abuja engaging in social events rather than concentrating on making laws to ameliorate the sufferings of their people. These same leaders are not willing to sacrifice anything for the betterment of the nation. They are not asked to give account of what they have done or are doing to better the lot of their people. WE APPEAL TO THE AUDITOR GENERAL OF THE FEDERATION AND THE ACCOUNTANT GENERAL OF THE FEDERATION TO KINDLY POLICE PUBLIC SECTOR FINANCES IN SUCH A WAY THAT STEALING AND PILFERING BY PUBLIC AND CIVIL SERVANTS WILL NOT BE INCENTIVISED. WE KNOW THESE MEN ARE CAPABLE OF ACTUALIZING THESE OBJECTIVES FOR POSTERITY AND WE WILL CONTINUE TO PARTNER WITH THEM TO STEM THE TIDE OF CORRUPTION IN NIGERIA.

CONCLUSION:
In Nigeria, the measures to prevent corruption are anchored on specific institutions and their enabling laws as well as in several administrative measures embedded in the mandate of other institutions which are not core anti-corruption agencies.

The efforts of the agencies are only heard and seen on the newspapers but in actual sense they are yet to prosecute offenders according to the dictates of the law, rather they engage in plea-bargaining which does not bring offenders to book.

Therefore, the Nigerian Government should painstakingly support Economic and Financial Crimes Commission, Independent Corrupt Practices and Other Related Offences Commission (ICPC) and other relevant bodies through provision of necessary authority and funds to see to convictions of offenders. These will help to promote a more secured environment and also make the economy of the nation to be viable.

The effect of corruption on the economy of Nigeria is cancerous; it has eaten deep into the marrows of the economic viability of the nation. The politicians themselves came into office through elections that were marred with violence and irregularities in results. The political and public service terrain has now become a habitation for hoodlums and unjust consideration for the public interest.

Majority of the politicians and public servants go into offices for selfish interest. A former Governor of Delta State was in jail in the United Kingdom for corruption. Other colleagues of his are either facing corruption charges or under investigation. This is why it is presumed that the government is just paying lip service to fighting corruption because quite a number of these corrupt politicians and public servants are walking free in the society without being charged to court and convicted for their offences.