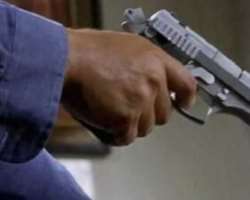 A 36-year-old Malaysia based Nigerian, identified as Mr. Samuel Kalu, has been shot dead by unknown gunmen while having a haircut at a barbing saloon located at Umuibe Street, Ndiegoro, in Aba, Abia State.

Vanguard gathered that the Kuala Lumpur, Malaysia-based Kalu visited Nigeria before the Covid-19 lockdown and was planning to return back to the Asian country before he was assassinated.

A source close to the deceased told Vanguard that Kalu went to Umuibe Street to have a haircut, while seated and having the haircut, he got a call from unknown persons. After responding to the call, unknown gunmen stormed the barbing salon and shot him dead.

According to the source, “the gunmen shot Kalu on the head at a close range, while seated on a barber's chair and quickly took his phone away to conceal their identity through the last call he received.

Some residents of the area urged Gov. Okezie Ikpeazu to provide security in the Ndiegoro area of Aba, especially at Ngwa road and Ohanku areas.

“This area is not safe and everybody knows it. I don't know those who killed him, we don't feel safe here. Police hardly come here and when they come it's always them and some Marijuana selling boys that will exchange money and they'll go, but they hardly look into the security situation of this area.

“Our bad roads in this entire Ndiegoro axis have not helped our security situation. We've cried, we've prayed and nothing is happening. A few weeks ago, a young man was also killed at Agu road off Ohanku road in this same Ndiegoro axis. We urge the government to do something,” A resident who preferred anonymity, lamented.

Other residents blamed the Abia State Police Command for failing to provide security in the area and urged the state government to urgently arm the Abia State Vigilante Group to help eradicate crime in Ndiegoro axis of Aba.

Efforts to contact the Abia State Commissioner of Police, Mrs Janet Agbede, were unsuccessful as her mobile number indicated that it was switched off.