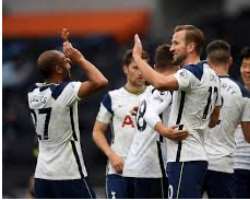 Tottenham Hotspur overcame visitors Chelsea 5-4 in a penalty shootout to progress in the League Cup following a 1-1 home draw in their fourth round clash on Tuesday.

Chelsea's Mason Mount struck the post to miss the decisive fifth penalty after every other spot kick had been converted.

Chelsea's Germany forward Timo Werner scored his first goal for the club to fire them into the lead in the 19th minute, turning and lashing the ball into the net from the edge of the area after receiving a cut-back from Cesar Azpilicueta.

Chelsea's new goalkeeper Edouard Mendy had a confident display in his first game since switching from Stade Rennes, making a good save to keep out a vicious shot from Spurs' debutant Spanish left back Sergio Reguilon in the second half.

But Mendy was finally beaten in the 83rd minute when Reguilon turned in the box and found Erik Lamela, who controlled the ball at the far post before netting from close range to force the shootout in which Tottenham prevailed.(AFP)