Says Chairman's Statement Was misrepresented
By The Nigeria Voice 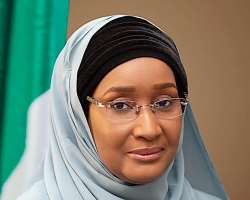 The Independent Corrupt Practices and Other Related Offences Commission (ICPC) has opened up on the purported involvement of the Minister of Humanitarian Affairs, Disaster Management and Social Development, Sadiya Farouq on the diversion of the N2.67 billion school feeding funds.

ICPC had reported that N2,67 billion meant for secondary school students in Federal boarding schools had been diverted.

But the ICPC said Farouq did not divert N2.67 billion for school feeding as alleged by some publications.

Mrs Azuka Ogugua, spokesperson of the commission, in a statement on Tuesday said that the commission chairman, Prof. Bolaji Owasanoye’s speech was misquoted and urged the public to disregard such publication.

Ogugua said that the commission’s chairman at its 2nd National Submit on Diminishing Corruption in the Public Sector was misrepresented, as some reports erroneously implied that the ICPC boss was referring to Farouq.

She said in the speech, Owasanoye stated that “we discovered payments to some federal colleges (secondary schools) for school feeding in the sum of N2.67b during the lockdown when the children were not in school.

“And some of the money ended up in personal accounts. We have commenced investigations into these findings.

“The Commission wishes to clarify that the “school feeding” referred to by the Chairman of ICPC was the feeding of boarding students in Federal Government Colleges who were all at home during the COVID-19 lockdown.

“This is not the Home-Grown School Feeding Programme being managed by the Federal Ministry of Humanitarian Affairs, Disaster Management and Social Development, ” she quoted the ICPC’s boss.

She added that the public were hereby advised to disregard the said reports suggesting reference to the school feeding programme going on in primary schools.