Obaseki’s Victory and the Illusion of Halting “Capitalist Godfatherism” 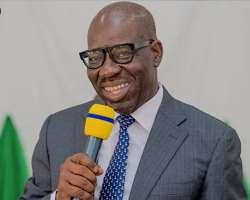 The electorate -the heartbeat of Nigeria- on Saturday 19th September, 2020, made their choice at the poll, barring any unforeseen circumstances. General public opinion shows that one of the reasons for the victory of the People’s Democratic Party’s candidate, Godwin Obaseki, at the Edo state gubernatorial election was the people’s fight against godfatherism and dictatorship. In one of his pre-election interview, Gov. Obaseki was asked about the reason for his rift with Adams Oshiomole, his estranged godfather. In response, he commented that the fall out was as a result of Oshiomole’s objection to his next term governorship ambition. This certainly explains the influence of a person or group of persons in determining the candidacy of governorship and election results.

To the surprise of many, godfatherism has always been the water that births politics in Nigeria. With no iota of doubt, politics in Nigeria has always been involved in the practice of godfatherism. However, godfatherism in the politics of Nigeria can be seen from two perspectives. The first is often likened to mentoring and sponsoring. In this case, godfathers select and sponsor credible candidates that would be ambassadors of the party ideologies and would be able to present the dividend of democracy to the populace. For instance, during the first republic, the first premier of the western region, the late chief Obafemi Awolowo served as a godfather to late chief Bola Ige, late Chief Anthony Enahoro, and Chief Ayo Adebanjo among others. The late chief mentored and sponsored his godsons towards the execution of his developmental agenda in the western region. Same can also be said of the late Chief Nnamdi Azikwe of the Eastern region and the late Sarduana of Sokoto, Sir Ahmadu Bello of the Northern region.

However, the second perspective which can be described as “capitalist godfatherism” can be evidently seen in the actions of the godfathers of the fourth republic. This calibre of godfathers see politics as an avenue for investment and profits as they present and sponsor feeble candidates that would gullibly hearken to their demands at the expense of the masses. Capitalist godfatherism often shows the relationship between godfathers and godsons as a “sweet beginning bitter ending” kind of relationship where by the godfather will bankroll the godson who would later betray the godfather. For instance, the fight between late chief Lamidi Adedibu, the former chieftain of Oyo State People's Democratic Party, and Chief Adewolu Ladoja, the former governor of the state, still remains vivid in the memory of the populace. Chief Adedibu claimed that Governor Ladoja, his godson, betrayed him and should be removed from his governorship position.

Situations like the above example continues to prove to us that since the beginning of the fourth republic, the politics of capitalist godfatherism has become so intense that any attempt to stop this menace is now considered an exercise in futility as the end of one era continue to give rise to another. For instance, in 2008, Adams Oshiomole was elected as the governor of Edo State and most people were jubilant because they believed that his administration would put an end to the political dominance of the late Tony Anenih and other political heavyweights in the state. Although this was achieved, yet, the political and physical death of Tony Anenih gave rise to the rule of Oshiomole. Presently, the people of Edo state are celebrating the victory of Governor Obaseki (a successful attempt at ending the godfatherism of Oshiomole) but it is our view that although Governor Obaseki may have succeeded in halting the current capitalist godfathers in the state, however, we may yet be waiting for the rise of another.