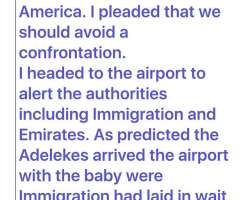 When Rita Dominic closes her eyes she imagines herself strutting her stuff with the best top movies stars Hollywood has to offer. Rita aka silky skin who has a beautiful figure that suggests sensible eating and her fair share of spending time at the gym has certainly come a long away from her days of TV programs such as Children's Variety, Junior Opinion, winning several dance competitions both at the local sports club and whilst at Federal Government College Ikot Ekpene where she gained her GCE 0-LEVEL qualification.

Rita, Uchenna, Nkem, Dominic, Waturuocha who was born on 1 July, 1975 and has always reached for the stars, attributes her inspiration to the encouragement of her immediate close knit family consisting of her parents, two elder sisters and a brother.

Especially her late mum who identified her obvious talent at an early age supported and nurtured her academic, social achievements and was very instrumental to her success as an actress.

From when Rita Dominic was about three years old and attending YMWCA nursery school Aba to Constitution Crescent Primary school all in Abia State Nigeria it was obvious she was destined for fame, at the time, mostly because of her excellent and unique singing and dancing talent, Rita whose hobbies include acting, singing, watching movies, reading and traveling graduated from University of Port-harcourt with a BA (1-lonours) Degree in Theatre Arts in 1999 hails from Abiah Mbaise local government area in lmo State and belongs to the Royal Waturuocha family.

Blessed with stunning and very attractive looks, Rita favours the indian rock cheek style and enjoys spending time with her friends and family when she is not on a movie set.

She recently visited Sierra Leone with some of her colleagues and was overwhelmed by the turn out of fans at the airport, a lot of them wearing t-shirts with their names on them. The Nigerian committee in Dublin also recently presented her with an honorary award.

Other facts about RitaPhilosophy - Always strive to achieve your heart's desire
Can't Do Without - Her Walkman or CD player
Type of Music - Oldies to jazz sentimental
Best African Food - Afang soup and semovita
Beauty routine - Mild cleansers and face wipes
Style of hair - I like the Afro hair because it sooths my face
What she admires in people - She likes natural and humble people
What I find attractive in a guy - Cool, polished, intelligent and 100% dress sense

HERE IS A LIST OF MOVIES THAT RITA HAS FEATURED IN