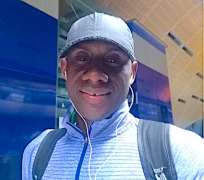 Congratulations are in order for former Arsenal Soccer School Coach, Marcellinus Anyanwu after he was named the head coach of Al Ittifaq FC, a division two club in Dubai, Sportivation Media reports.

“When I read this about you. I became the happiest man on this planet. Honestly speaking, I can not find a word to explain the kind of joy that has been going through my mind since I received the news. I said to myself that my hands has done very good too”.

It should be recalled that Marcellinus Anyanwu worked as an assistant coach under Nduka Ugbade at MFM FC in 2013.

Ugbade, who is also a one of the best coaches Nigeria has ever produced also prayed for Anyanwu as he takes his first Senior team coaching role.

“God will bless you and your family greatly and also open many more doors of great success to you all the days of your life and that of your family. In the mighty name of Jesus”.

“Congratulations, my dear Coach. I pray that God’s favour and wisdom will bring you success there in other for God’s name to be glorified.

“May God make Nigeria recognise your outstanding performance so that you will be invited to come and bring honour to your country, Nigeria, in the nearest future.

Anyanwu described his move to Al Ittifaq as a step up, and he is delighted and can’t wait to bring his wealth of experience to bear on the team.

“It feels so good, I’m excited to be the coach of Al Ittifaq FC, This is promotion, moving from Academy to a division two league club”.

“The club has been monitoring me for a very long time and Thanks to a recommendation by Arsenal football club of London following my stint with the Gunners Soccer School in Dubai”. Anyanwu told Sportivation Media

“Al ITTIFAQ wants me to build a formidable team consist of local and international players that can stand the test of time”.

“I have been told not to be under pressure to get promoted, I should work with ease and get the best result this season.