The Limits Of Bullionvanism As An Effective Political Strategy 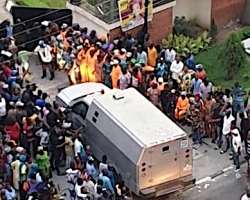 "The limits of tyrants are prescribed by the endurance of those whom they oppress."

- Frederick Douglas.
Bullionvanism is coined to define the concept of deploying a deluge of cash coveyed by bullion van(s) to influence the political process to determining the outcome of an election. The process would include the buying over of vote canvassers, the voters themselves, thugs and touts hired to intimidate voters, the official election umpires, election monitors, journalists covering the election, prospective election tribunal members, lawyers to handle cases and judges that would preside on particular cases.

The belief that money could turn "black to white" or vice-versa had fostered thiss mercantilist approach to politics where the welfare of the public takes the background and kleptomania clearly isolated as the main goal. Thus the bullionvanist had engaged in kleptomania in a weird combination of allopathic and homeopathic proportions, to creating bullionvanism as a political philosophy and strategy.

Extrapolated, it shows, as far as this philosophy and strategy of bullionvanism is concerned, that the man on the street does not matter. His needs, irrelevant. His feelings, discounted. His aspirations, disregarded. His dreams, deprecated. His desire, disesteemed. Bullionvanism presupposes that government power is meant to steal and loot all public resources, and shake crumbs to cronies who would lap them up like edacious dogs, and with gratitude. That way, the dogs, gifted with indescribable capacity to be loyal to those who feed them, would look up to the dispenser, the bullionvanist, for more.

The dogs would then tie their own destinies to the fortunes or misfortunes of the bullionvanist. They become the defenders and justifiers of not just bullionvanism, but also the bullionvanist. In so doing, they discard all values, self respect and dignity. They become unashamedly, moral reprobates, leeches, wild locusts and scroungers. They cincture themselves from all feelings for others and their society, while they engage in destructive, self immolating, parasitic individualism.

With bullionvanism, the idea is that when election comes, deploying several bullion vans of naira would make the bullionvanist victorious. With an electorate already povertized, pauperized, impoverished spoliated and squalorized, doting out few wads of naira, to inflict them with temporary amnesia to forget their woes, they would do the bidding of the bullionvanist. They would vote the way he wanted them to vote and install a new criminal either as a senator, a governor or what have you.

It is a political strategy devised by the most successful political mercantilist in the contemporary political history of Nigeria. First openly deployed in the weeks towards the Elections of 2019, by Alhaji Bola Ahmed Tinubu (BAT), it could be debated that this strategy has been the main one he had employed severally to install his cronies across the Yorùbá States, especially in Lagos State. Until 2019, when the culture of impunity had been accentuated to an ignominious crescendo, it has never been done so unabashedly and openly.

When the bullionvanist went to Osun State to boast at the Palace of one of the traditional rulers that he was richer than the State, he was alluding to his cash stuffed bullion vans with which he has buoyed the ambition of many of his cronies and destroyed the legitimate aspirations, dream and desire of millions of people across Yoruba States and other parts of the contraption called Nigeria.

His confidence in bullionvanism has been characterized as "impregnable" because, as a political strategy, he had used it over and over and over again with immense success. His success in dominating Lagos State has been ascribed to this strategy. His ability to help convince Nigerians to vote for a dullard as the President of Nigeria's Unitary Republic who has been earlier rejected three times at the polls, has also been ascribed to this strategy.

Bullionvanism was considered to have fortified him to the point he has come to see himself as a tin-god to be worshipped by all and sundry. It has caused him to denounce all Obas in Yorùbá Nation as "useless." It has caused him to even disrespect Olúayé, the Oonirisa of Ilé -Ife, refusing to stand on his feet as a mark of respect for the pre-eminent Oba of Yorùbá Nation. The effrontery displayed, he further stretched to obnoxious extent by sitting down to greet the Ooni! What a blasphemy!

Many Yorùbá sons and daughters were aghast wondering what could be going on. They were flustered and flabbergasted. They wondered what could have been the reason for such disgraceful behavior coming from someone who claimed to be a Yorùbá son! Some analysts felt that the reason why he actually behaved like that could be traced to his belief in the concept of bullionvanism - "I have more money than anyone and I am more important than anyone."

Analysts believe that despite observable variables pointing to what 2023 Presidential race would look like, the bullionvanist has been feeling so bullionvanistic to the extent that he felt 2023 would be a "walk over". It has been posited that he even believed that if he could personally spend mere 35 billion naira as alleged, to help install Mohammadu Buhari, he would be willing to dispose several bullion vans of naira for himself, to make himself President of the Unitary Republic of Nigeria.

With bullionvanism as his philosophy and adopted strategy, the successes he has had with it has continued to drive him to the point observers think he has been over valuing himself and over estimating the efficacy of his tactics. The bullionvanist has been reported to seldom listen to counseling as he visualizes himself as the "smartest politician" in the History of politics in Nigeria. One insider noted that the bullionvanist is crisis prone. He could hardly go two weeks before he landed himself in one trouble or another. The insider added that there had to be a fire brigade kind of committee set up around him to "put out these fires as they are lit." With palpable frustration he insisted, "We have to constantly save him from himself."

Set backs in Ondo and Kogi States have failed to bring him the reality checks he needed as he continued to gallivant around with highfalutin sense of himself. Several of his praise-singers also were carried away by the power of bullionvanism and harboured goutish and garish fantasies of being made rich through him. Some of them believe they could attain the height of their professions by worshipping in the courts of bullionvanist. With their shallow thinking, myopic projections, cinctured vistas, they, without any basis whatsoever, the lackeys, began to compare him with the great sage, the avatar, and the greatest Yorùbá son since Odùduwà, Obafemi Awolowo.

The recent beat back in Edo State of the bullionvanist seemed instructive as to the limits of bullionvanism as a political philosophy and effective political strategy. The people of Osun State were positioned in 2018 to give this lesson as a study in the field of political science, but they got easily intimidated and cowed. The threats, real or imagined, of MC Oluomo, a tout imported from Lagos, bullied and badgered them. It coerced them into accepting with discombobulated equanimity, what they sought to reject through their votes.

The Edo experience opened a new vistas on the science and philosophy of bullionvanism. It established the rudiments of how to neutralize such a heinous political strategy that has sang the nunc dimittis of many Yorùbá States as it plunged them into poverty, squalor, want, social dislocation, political timidity and noxious docility. It has brushed up old lessons learnt in political struggles but treated with triviality and levity by contemporary political gladiators.

Those lessons would include:
(1) an electorate that is:
a) very well educated;
b) awesomely organized;
c) very well at alert,
d) bold, daring, not easily intimidated, and
e) watchful and incredibly patriotic.
(2) A contending leadership that is:
a) on a mission with a vision
b) fairly honest and open;
c) fairly capable and can deliver;
d) translucently sincere and committed;
e) bold, daring and cannot be intimidated and
f) incredibly patriotic
While resources would be an important variable of all these, what the Edo experience taught us is that resources deployed with a bullionvanistic philosophy could be rendered ineffectual by the populace or the electorate that is sufficiently educated and alert to their rights and aspirations. That is why loads of money bullionvanned to Edo produced no result for the bullionvanist and his sympathizers.

There are some other pecuniary variables that would still be relevant in this stead to neutralize bullionvanism and delineate its limits as a political strategy. The environment, political history, social milieu, economic climate, religious ambient among other variables would still have some impacts no matter how we look at it, but essentially, the points isolated above would drive the engine and drive the procedure of liberating the people and the process from the vestiges of bullionvanism and the bullionvanist.

Frederick Douglass had insisted that "The limits of tyrants are prescribed by the endurance of those whom they oppress." The same way, the functional effectiveness of bullionvanism is determined by those against whom it has been deployed.