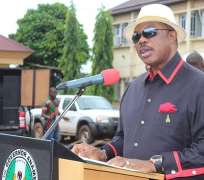 It is a good thing to be proud of one’s state, and I am. Anambra is perhaps one of the few states in Nigeria that have chalked up some good mention. Her respect comes not from her size, but her worth. She has limited land space - the next smallest state after Lagos and currently battles soil erosion in over a thousand sites that further shrinks her size. The worth of Anambra in the words of the British philosopher, John Stuart Mill, “is the worth of the individuals composing it”. Anambra stakes good claim to producing people of high intellect, uncommon industry and brilliant accomplishments.

She may not always get her acts right and can trip up on issues that require little understanding to resolve. The failed abduction of her governor sometimes in 2003 was one such issue that required less of the approach she employed in dealing with the problem. However, with sufficient dose of the Anambra spirit she easily springs back from every crisis to stay the pace.

Anambra is blessed with quality human capital and a succession of good leaders. What she loses, running intense and money-guzzling political campaigns, she duly compensates with her capacity to keep aglow the light that illuminates the path that other states follow.

In the last couple of years, the state has made some giant leap in governance that puts her ahead of others better positioned to lead the charge. She has been mentioned as one of the few states in Nigeria that live above the margins of poverty. The National Bureau of Statistics in its 2019 official report named Anambra, Lagos, Delta, Ogun, and a few other states as having the least percentage of poverty head count in Nigeria (Guardian newspaper 04/05/2020).

This viability status of the state was long acknowledged by many Nigerians who are worried at the bad turn of events in country. Marveling at the speed with which Anambra bridged the gap in her educational development to set the pace for states, most of which are oil-producing, Senator Ben Murray-Bruce said in his Common Sense series: “Twenty years ago Anambra and other Southeast states lagged in education and had poor boy child school enrolment, but today Anambra leads the nation in WASSCE results. For the past three years Anambra has had over 60% pass rates in the West African Senior School Certificate Examination”.

On the heels of this were no less commendations from other Nigerians who were impressed with development trajectory in the state. At the height of the Covid-19 pandemic and its attendant lock-down, the Anambra Broadcasting Service (ABS) which has been brought to a fairly even level with the best anywhere in Nigeria, led the way in online teaching in the country. The initiative was copiously endorsed by the Minister of State for Education, Mr. Emeka Nwajiuba. Femi Fani-Kayode, former Aviation Minister, was no less impressed when on a stopover visit in the state he joined Governor Willie Obiano on inspection of the ongoing construction at the Anambra International Cargo, Airport. He was direct in commending the effort of the government in constructing one of best airports in Nigeria, on completion. He simply called it mind-blowing. Airline owner and CEO of Air Peace, Allen Onyema, would seem to be more effusive when, after a visit of the construction site, he quipped while interviewed that he felt proud to be called an Anambra son.

If there were endorsements on the airport project and other infrastructural development effort of the Obiano administration, more should come when a critical appraisal is done on the overall progress of the state and if the achievements of the administration are measured less in brick and mortar. What the administration has achieved in intangible development will compel both the Governor’s ardent supporter and his rabid critic to unite in commendation, especially for wresting the state from the vice grip of kidnappers and armed robbers. Though there may be occasional disturbances in notorious flashpoints in the state, but they do not detract from the fact that Anambra rides today on the crest of a wave of peace. She is seen as one of the safest states in Nigeria on account of the administration’s effort. What it has achieved outside the traditional role of fixing roads and bridges is better experienced in the conviviality, evident in the return of social and business activities in the state. It is not just about an upsurge in the population of people resident in the state, but businesses, land, service delivery have all gained greater value. A visit to social events in the state or a walk to sporting arena like Ekwueme square in Awka would convince a doubting Thomas that a progressive society is emerging at the double.

It took the achievement on security to unlock the potentials hitherto latent in the state. Every sector of the state economy has leapt to sudden height to the extent that Anambra can now boast of a product brand or two - like the Anambra rice. People, particularly investors, who until now, had scoffed at the idea of bringing their investments home either out of fear of abductors, armed robbers or other wastes of space, have in one burst of energy changed the investment profile of the state. Some of these industries like Coscharis Farm, Awka Millennium City, JOSAN Rice mill, Lynden Integrated Farms, Ekcel Farm, Stine Rice, Chelsea Farm etc though in existence, were unproductive for the reasons above. There is also appreciable rise in micro, small and medium businesses in the state with the establishment of the Anambra State Small Business Agency (ASBA) in 2014 by the Obiano administration to facilitate access to resources required by investors in that cadre of enterprise to achieve sustainable development in Anambra state.

The effort of the administration in strengthening some institutions of government like the tax system and health insurance scheme has led to some changes that are impacting positively on the state. From netting N8billion in tax returns in 2013, the state has notched up to N26 billion in 2019. The Anambra State Internal Revenue Service, using improved data collection has been able to nip off leakages and established, through collaboration with National Bureau of Statics, that about 1.2 million people are doing business in the state. It is not any different in what the state does with her introduction of the Anambra State Health Insurance Agency (ASHIA). Well over 90,000 persons are on the scheme, twice the number of enrollees on a standard health insurance scheme. It is well to remember that certain ailments not easily on health insurance scheme like tuberculosis is on ASHIA scheme. With a monthly fee of N1, 000 and N12, 000 per year a resident becomes an enrollee on the scheme. No doubt, Anambra's development curve is on the rise and does not betray any sign of downward slant. It is expected to be furthered in the months ahead.