Nigeria May Be Doomed If Idps Are Not Resettled With The Renewedyouths Recruitment By Book Haram....gov Zulum 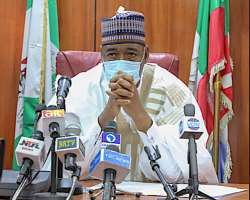 Governor Babagana Umara Zulum of Borno State has said that if concerted efforts are not put in place for the safe return of internally displaced persons, (IDPs), in a dignified manner to their ancestral abode, the nation may be doomed by facing more severe challenges as Boko Haram insurgents are recruiting more children into the sect because of unemployment and high level of illiteracy among the youths. The governor stated this Weekend when a 18-member House Committee on North East Development Commission (NEDC) paid him a courtesy visit at the Government House Maiduguri during their 3-day state working visit to the state.

Gov. Zulum attributed the recruitment and conscription of the youths by the Boko Haram insurgents as a result of high rate of unemployment and poverty, informed by their continuous stay of Internally Displaced Persons (IDPs) at the IDPs camps and host communities.

He said it is on record that about 1.5 million IDPs are being accommodated in Monguno, Pulka, Banki, Maiduguri, Gamboru Bama , Damasak and Gwoza IDPs camps, as well as other border communities with Cameroon Republic. “The only solution we have now is to ensure the safe return of our people to their homes in a dignified manner,” he said “If nothing is done believe me sincerely, we shall face a very serious challenge even more than what we are facing now.

"I suggest that the solution to this problem is to shift from short term humanitarian support to longer-term development and sustainable means of safe return of IDPs to their communities", Zulum said. In his remark, the House Committee Chairman on North East Development Commission, (NEDC,) Hon. Khadija Bukar Abba Ibrahim said there was need for governments of the six northeast states affected by the boko haram insurgency should to partner with the commission on the goals of improved sustainable development for the region.

She also thanked the governor for his hospitality and commended him for his commitment and support to the IDPs especially in the areas of catering for their welfare and efforts in resettling them back to their ancestral homes to continue with their normal life safely.