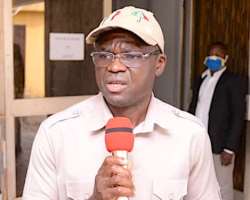 The Deputy Governor of Edo state, Phillip Shaibu, has spoken up on his arrest by security agencies over possession of illegal arms, pointing fingers to the APC.

He accused the All Progressives Congress (APC) former national chairman, Adams Oshiomhole of plotting to use federal power to intimidate him and Governor Godwin Obaseki.

He also added that the plot linking him to the arms deals by the opposition party was so that they could gain access to rig the Governorship election.

His spokesman, Benjamin Atu, in a statement said: “The Deputy Governor has not been arrested but we are aware of an ongoing plan to arrest him over unfounded lies so that Oshiomhole and his cohorts will have the freedom to rig the Edo North Senatorial district election.”

“President Muhammadu Buhari has kicked against rigging of the election in Edo State, promising to congratulate whoever emerges as the winner.

“But Adams Oshiomhole and Osagie Ize-Iyamu (APC candidate) who felt betrayed by the President’s statement decided to use the back door to arrest the Deputy Governor in the name of illegal possession of arms.

“Comrade Philip Shaibu has been in active politics since Nigeria returned to Democracy in 1999 and has never been linked to the issue of an arms deal. In less than 24 hours to the Edo State Governorship election, is it today that Oshiomhole now wants to organize an arrest?

“I want to assure that Comrade Philip Shaibu can’t be arrested because the People of Edo State will resist it. Oshiomhole is planning to create unrest in the State on election day by his attempt to use the DSS to arrest the Deputy Governor.

“We are calling on President Buhari and the International community to immediately prevail and call Oshiomhole and his thugs to order to avert unrest that may follow their actions.”