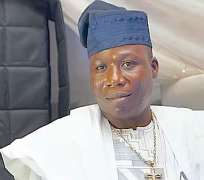 While all these conversations were going on, General Yusuf Buratai, the most malevolent Chief of Army Staff in Fulani Republic of Nigeria's1pq1qA trajectory, was sitting there in silence, praying and hoping that Mr. Sunday Igboho would take the bait and agree to come to the Government House. Whatever plans Buratai had for Mr. Igboho, was frustrated because he could not be convinced to come.

As at that time, when GSM was inviting Mr. Igboho, the vicinity of his residence had lorry - loads of soldiers packed here and there. Their purposes and objectives were not clear. But the brave warrior of and for Oòduà Nation suspected their intent. He ignored them, doing his thing. His preparations for the October 1, 2020 march to further reinforce the desire of the Yorùbá people for Oòduà Nation was in top gear.

The enemies coagulated under the auspices of Fulani herdsmen, being enabled by the appurtenances of Nigerian State would seek to destroy him. They have been trying to trace him and arrest him. They have his residence monitored. They have his close friends monitored. Many of his aides are also being monitored. But the owners of Oòduà Land would not let this happen. Knowing the way they operate, these enemies would not give up, and he himself must not relent.

"I am not going to be deterred," he had said in a small meeting in which we jointly participated. "This is to be expected. We are not afraid of them. It is time to liberate our land. Yorùbá would not be slaves in their land. Omo Oòduà ni wa," he had explained further. He then added, "We know their tactics, to intimidate and arrest without trial. But they won't be able to stop us. We will have our Oòduà Nation."

Already, word was out that they were planning to arrest him. They were determined to sabotage the October 1 March. The Intelligence officers, like ravenous ants on a mission blessed by the morning dew, are crawling all over the place. They want to have him arrested so that he won't be there for the Yorùbá Nation to play his patriotic role in the March For Freedom; in the March of Freedom.

Despite the fact that Mr. Igboho seems to be a number of steps ahead of them, it remains to be seen whether the agents of the Fulani Federal Government would succeed in their dastardly plans to arrest him. They have made Mr. Sunday Igboho the focus of the October 1, 2020 protest march. But he does not mind. His followers are confident and self assured. They are not worried. They are brave warriors for Oòduà Nation.

Some detractors have been trying to hawk undue animosity against Mr. Igboho. They have been condescending from their high horses because they have a chain of degrees after their names. They have been contending that Mr. Igboho was not exposed and has not received the kind of "education" that they had. They have forgotten that whiteman's "education" has limited values compared to being actually educated in the ways of our fathers, and the values we inherited from them.

Jesus Christ was an ordinary carpenter. Out of his 33 years of physical existence, only the last three was dedicated to his ministry. The impact of those threw years could be attested to by all and sundry. Incidentally, Sam Nujoma of Namibia was also a carpenter. He delivered his people from slavery and colonialism. It is not the height in which you are that matters, it is lowly from whence you come.

Mr. Sunday Igboho has been thrusted into the midst of all this to play his role. He has picked up the gauntlet. His concern is the freedom of Yorùbá race from the Fulani or any type of domination in our space. Mr. Igboho has hearken the clarion call. He has heard the shrill cries of our women and daughters. He has heard the agonies of the victim of arson and destruction. He wants to play his own part. He is ready to stand in gap for his own Yorùbá people.