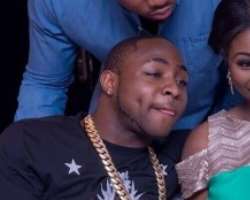 Nigerian music act David Adeleke more popularly known as, Davido has confirmed as being cast in the sequel to the hit Hollywood movie, 'Coming to America 2'.

On Monday, the pop singer and songwriter replied with “Can't wait!” to a tweet by an entertainment account that announced he was featured in the sequel to the romantic comedy.

The scoop about his participation in the movie was initially disclosed in September 2019 by comedian, Micheal Blankson who was with him at a concert in Atlanta.

“Davido told me he has a performance scene in the movie #ComingToAmerica2 congrats homie,” he tweeted.

It is unclear what role the 'FEM' hitmaker played in the movie.

The first part of the movie which was released in 1988 was directed by John Landis based on a story originally created by comedian and actor Eddie Murphy who played several characters and the main character in the picture.

Coming 2 America is being directed by Craig Brewer and stars Murphy as Akeem/Randy, Arsenio Hall as Semmi, Jermaine Fowler as Lavelle, Leslie Jones as Lavelle's mother, Tracy Morgan as Reem, James Earl Jones as Jaffe Joffer, and Louie Anderson as Maurice. The film is scheduled to hit theaters on Dec. 18, 2020.

Wesley Snipes who plays a role in the sequel has revealed new details about the highly-anticipated flick to Coming to America, doubling down on co-star Eddie Murphy's recent claim that the Coming 2 America is “funnier than the first one.”

“You're going to have to wear a diaper!”, Snipes says.