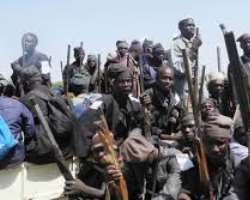 A Statement By The Prominent Civil Rights Advocacy Group; Human Rights Writers Association of Nigeria on The Illegality of Dialoguing and Granting Amnesty To Armed Mass Killers and Terrorists on The Wake of The News That Katsina State of Nigeria Spends N4.2bn on War Against Bandits, Kidnappers.

Recognizing the significance of security as the pre-condition for survival of the Nigerian people and nation, the Constitution of the Federal Republic of Nigeria provided in section 14 (1) (b) that “the security and welfare of the people shall be the primary purpose of government”.

The duty conferred on the government by this provision has not been substantially and substantively discharged as the prevailing high level of human insecurity in the country demonstrates. Sadly, the Federal government and some states of the Federation are actively promoting acts of terrorism by commission and ommision particularly through the illegality of granting AMNESTY to TERRORISTS who ought to face severe judicial sanctions for their acts of terror against the Nigerian people and Nigerian State.

Since 2009, Nigeria has gradually slipped into a terrorist enclave where armed mass killings and terror acts have become the regular signature of the country’s social memoirs. Aside the complex permutations of socio-economic and political upheavals already facing the polity, the emergence of these supercilious army of armed mass killers and terror extremists has not only pose a threat to the budding democracy in place, it also may endanger efforts to achieve industrial development in the country.

Nigeria has experienced pervasive violence since it returned to civilian rule in 1999 after more than 15 years of military dictatorship. Despite the brutal strategy followed by the state in response to public disorder, efforts to establish peace in Africa’s most populous and largest oil-producing nation have failed. Indeed, state repression has increased rather than reduced violence in many areas.

While government plans amnesty and reintegration into the society as a means of curbing the spate of armed mass killings and terrorism, it seems to have spiraled out of control.

FACTORS AT PLAY:
The emergence of a former military ruler as president of Nigeria in 2015 created the expectation that the terror group could be brought under control, instead violence escalated and spread into mass killings and destruction of properties by armed Fulani herdsmen, bands and kidnap gangs.

To be fair, there were some successes in rolling back the expansion of Boko Haram. Between mid-2015 and late 2016, the federal government moved the terror and counter-terror “situation room” to Maiduguri; the heart of the crisis.

The military had halted the expansion of the “Caliphate” and took back the 14 local governments seized by the terror group. Flights and normal business returned to most parts of the northeast. Attacks stopped and the military could claim that Boko Haram had been technically defeated.

But then, just when it seemed the menace of Boko Haram had been ended by sheer military force, the federal government suggested dialogue and ransoms. Aggression and violence returned in Northern Nigeria and still hasn’t been completely controlled.

For instance, apart from herders killing farmers in the North Central, for more than two years, north western Nigeria has faced devastating attacks from armed bandits, particularly in the states of Zamfara, Katsina, Kaduna, Niger, and Sokoto.

Such attacks are driven by many overlapping factors, including cattle rustling, the proliferation of small arms and light weapons, illicit artisanal mining, youth unemployment, poverty, and inequality.

It is estimated that many of the armed bandits are of Fulani origin. Banditry, which includes armed robbery, murder, rape, and cattle-rustling, is present in Nigeria, Niger, Chad, Cameroon, Senegal and Mali.

According to a report from the West Africa Network of Peace building (WANEP), from January to December 2019, armed bandits were responsible for more than 1,000 civilian deaths in the Northwest.

According to the Nigerian Security Tracker, this is greater than civilians killed by Boko Haram over the same period (though not greater than all those killed, which includes soldiers and Boko Haram members).

The impact of these deaths has ripple effects across communities that will last generations. A committee set up to investigate the menace of armed banditry, headed by Mohammed Abubakar; a former inspector general of police, reported that in Zamfara state between June 2011 and May 2019, 4,983 women were widowed; 25,050 children were orphaned; and more than 190,000 people were displaced as a result of armed banditry.

The Nigerian security forces initially responded to this issue by increasing the deployment of the military and police to the troubled zones. These deployments were under several code names such as "Operation Puff Adder," "Diran Mikiya," "Sharan Daji," "Hadarin Daji," "Thunder Strike," and "Exercise Harbin Kunama III."

But these operations have produced mixed results. While the security forces have successfully pushed back bandit attacks, destroyed several hideouts, and killed or arrested hundreds of bandits, attacks have continued.

Against this backdrop, the governors of Katsina, Sokoto, and Zamfara, agreed on a peace deal with the armed bandits in 2019. According to Governor Aminu Bello Masari of Katsina, negotiation was the best way to achieve lasting peace. The agreement involved disarmament, the release of kidnapped victims, and an amnesty for the bandits.

But the agreements did not last. While there was a lull in attacks towards the end of 2019, attacks picked up again in 2020, reneging on the terms of their agreement.

OUR STAND AND WAY FORWARD:
The argument against negotiating with terrorists is simple: Democracies must never give in to violence, and terrorists must never be rewarded for using it. Negotiations give legitimacy to terrorists and their methods and undermine actors who have pursued political change through peaceful means. Talks can destabilize the negotiating governments' political systems, undercut international efforts to outlaw terrorism, and set a dangerous precedent.

In the light of the ongoing, the will and dynamic approach in the fight against Boko Haram were short-lived, which wasted the success achieved in two years. When the government sought dialogue and negotiation and paid ransoms, it re-energised the terror group.

The current administration was weakened when it began considering amnesty for repentant members of the group and swapping their prisoners for release of innocent Nigerian and foreign captives, hence, the protracted crisis.

Dialoguing and Granting Amnesty to Armed and Mass Killers indicates that there are people in government who lack the will to fight because of religious and ethnic affiliations or connections. Some in government consider Boko Haram members as northerners or Muslims who should therefore be dealt with cautiously.

The United States security agencies have been able to see to the end of Osama Bin Laden; a globally-acclaimed terrorist in Afghanistan years ago; also winning war against the ISIS activities in Syria in recently as a result of coordinated war on terror embarked upon (US White House Report, 2018).

Coordinated war on terror is used to connote containment of conflict, terror, banditry and all forms of insecurity in a state. Coordinated efforts of all security agencies in Nigeria; National Intelligence Agency (NIA), State Security Service (SSS), Nigerian Security and Civil Defence Corps (NSCDC), Nigeria Police Force, Nigeria Army (NA) as well as other para-military agencies would definitely go a long way in decimating and winning war on insecurity and terrorist activities in the country.

Government therefore has the responsibility to provide genuine leadership in the war. Dialogue, negotiation, ransom payments, amnesty and integrations of repentant insurgents into the society are not the solution. They will only serve as the internal seeds of destruction in the efforts against terrorism.

The recent rise in banditry and demonstrations, against it show that the people can no longer accept the circumstances. Boko Haram, Islamic State, bandits, armed Fulani herdsmen and kidnap gangs are threats to Nigeria’s peace, stability, security and economic prosperity.

The resort to shallow and poorly conceived peace deals is an age-old failure of the Nigerian security and political establishment. To truly achieve peace, the government must start by building trust with local communities vulnerable to attacks by bandits.

They should set up early warning and response systems, working with vigilantes and community leaders on the ground. And they should begin to address the structural inequalities that drive people to violence, like poverty, a lack of education and opportunity, and government mistreatment.

The military in particular should redirect its attention to controlling the trafficking in small arms and light weapons, specifically by patrolling porous national borders.