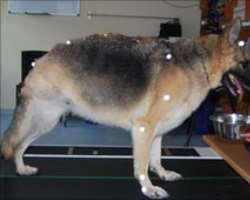 By Victoria Gill
Scientists have filmed and studied the gaits of three-legged dogs, in a bid to develop robot-building strategies.

The researchers want to find out how the dogs compensate for the loss of a limb. They hope ultimately to develop robots that could compensate similarly.

The scientists filmed the dogs from several angles with high speed cameras as they ran on treadmills.

They presented their research at the Society for Experimental Biology Annual Meeting in Prague, Czech Republic.

In the study, dogs that had already lost either a fore-limb or a hind-limb through an accident or injury ran on a treadmill for two minutes.

The researchers filmed the dogs with a set of 10 high-speed infrared cameras. They also placed several reflective markers on the dogs' skin, which allowed them to trace the movements of different parts of the animals' bodies.

The researchers produced a trace of the dogs' movement

Martin Gross from the University of Jena in Germany led the study.

“At the end of the project we will hopefully have some robots that will be very efficient in unknown environments,” he told BBC News.

“Because maybe something could happen to the robots whereby they could lose a limb.”

Dr Gross said that his brother's three-legged pet inspired him to use the dogs in his biomechanics research.

“The one with only three legs is still the fastest of all his dogs,” he said.

The dogs found adjusting to missing a fore-limb more difficult than missing a hind-limb.

The scientists say that this is because more of the animal's body weight is born by the fore-limbs.

Dr Gross and his team have already developed some small, quadrupedal robots, and this study – to develop ways for their robots to manage if they are “injured” – will continue for the next two years.