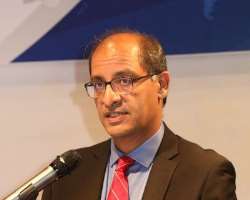 As a trained medical epidemiologist, Ijaz currently serves as the principal deputy director in the Division of Global Health Protection, Center for Global Health at the U.S. Centers for Disease Control and Prevention. At The Carter Center, he will provide leadership for programs working to prevent or eliminate six tropical diseases in 18 nations, as well as efforts to improve mental health care in the United States and abroad. He succeeds Dr. Dean Sienko, who has served in the role since 2016 and will be retiring in October.

“We are thrilled to welcome Dr. Ijaz to the team, as he is a respected scientist, an engaged and passionate leader, and a manager who builds collaboration and trust across diverse teams,” said Carter Center CEO Paige Alexander. “Colleagues describe him as visionary, inspiring and motivational. I know his ambition will help The Carter Center continue to make an impact by further improving health care for the world’s poorest people in the coming decade.”

Founded by former U.S. President Jimmy Carter and his wife, Rosalynn, in 1982, The Carter Center is a leader in the eradication and elimination of diseases. The Center assists nations in preventing Guinea worm disease, river blindness, trachoma, schistosomiasis, lymphatic filariasis, and malaria by using health education and simple, low-cost methods through community engagement. It leads the international coalition working to eradicate Guinea worm disease, reducing cases from an estimated 3.5 million in 21 nations in 1986 to only 54 human cases in four nations in 2019.

Ijaz has held successive leadership positions since joining the CDC in 2002, including deputy director for science and programs in the Center for Global Health, and chief of the Tuberculosis Field Services and Evaluation Branch in the National Center for HIV, STD and TB Prevention. He began his career as a medical epidemiologist at the Arkansas Department of Health, where he worked with marginalized rural populations at the state, local, and community levels. He has worked extensively in Asia, Africa, and across the developing world on malaria, tuberculosis, and Ebola.