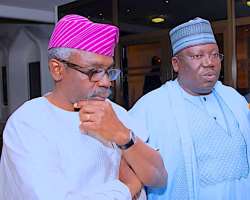 Socio-Economic Rights and Accountability Project (SERAP) has filed a lawsuit against the Senate President, Dr Ahmad Lawan and Speaker of House of Representatives, Mr Femi Gbajabiamila over “their failure to publish reports of all completed public hearings and corruption probes by the National Assembly since 1999, and failure to disclose the number of probes that have resulted in any indictment of suspects, and to name such suspects.”

In the suit number FHC/ABJ/CS/1065/2020 filed last week at the Federal High Court, Abuja, SERAP is seeking: “an order of mandamus to direct and compel Dr Lawal and Mr Gbajabiamila to send all reports of completed public hearings and corruption probes to appropriate anti-corruption agencies to consider if there is sufficient admissible evidence to pursue prosecution.”

SERAP is also seeking: “an order for leave to apply for judicial review and an order of mandamus to direct and/or compel Dr Lawal and Mr Gbajabiamilato widely publish all reports of completed public hearings and corruption probes by the Senate and the House of Representatives, and to disclose the number and names of any indicted suspects since 1999.”

SERAP is asking the court for “an order of mandamus to direct and compel Dr Lawal and Mr Gbajabiamila to sponsor a resolution to stop lawmakers from directly getting involved in the execution of projects by MDAs, and to ensure the proper and effective exercise of their oversight functions over corruption allegations including in the Niger Delta Development Commission (NDDC) and Nigeria Social Insurance Trust Fund (NSITF).”

The suit followed SERAP’s Freedom of Information (FoI) requests dated 25 July, 2020, stating that: “The most effective way to deter corruption is to make the cost of engaging in these types of acts higher than the rewards. This end can only be accomplished by making public the reports and pursuing public accountability for corrupt acts.”

In the suit, SERAP is arguing that: “The court ought to compel Dr Lawal and Mr Gbajabiamila to publish the reports of hearings and probes and to send the reports to appropriate anti-corruption agencies for prosecution. Granting the reliefs sought would bolster public trust and confidence in the lawmakers’ oversight functions, and dispel the perception that many of the hearings and probes are politically motivated and serve personal interest, rather than the general public interests.”

SERAP is also arguing that: “Nigerians have the right to information, as guaranteed under Section 39(1) of the Constitution of Nigeria, 1999 (as amended), and Article 9 of the African Charter on Human and Peoples’ Rights, which the country has ratified and domesticated as part of its national laws.”

The suit filed on behalf of SERAP by its lawyers Kolawole Oluwadare and Opeyemi Owolabi, read in part: “There is no legally justifiable reason why the information should not be made widely available to Nigerians, and why the prosecution of indicted suspects should not be pursued, where there is relevant admissible evidence.”

“Both the Senate and House of Representatives have over the years conducted several public hearings and corruption probes to expose pervasive problem of corruption in MDAs. Publishing the reports and pursuing prosecution would give Nigerians greater confidence that their lawmakers can use their constitutional oversight functions to address corruption in Nigeria.”

“Lack of transparency and accountability about the systemic and widespread corruption allegations in MDAs and among high-ranking public officials has continued to create a culture of impunity, and to have negative impacts on socio-economic development, as well as access of Nigerians to public goods and services, including quality education, adequate healthcare, clean water and regular electricity supply.”