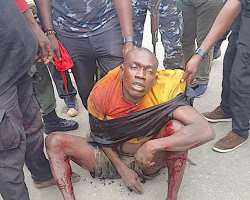 Residents of some parts of Ogoniland jubilated on Saturday morning as news filtered in that officers of the Rivers State Police Command have arrested Honest Diigbara, aka Boboski, a notorious leader of a kidnap and armed robbery gang.

Boboski was alleged to be behind different atrocities in the areas for many years.

The gang leader had been on the police watchlist for years and had bounty of N30 million placed on his head by Governor Nyesom Wike.

He was arrested in the early hours of Saturday, in a sting by the police, with assistance of a local security outfit.

He was arrested along with his second in Command. He also sustained injuries during a gun duel with law enforcement officers.

“He was arrested through credible information at Korokoro Community in Tai Local Government Area , where he was hibernating with his gang of killers.

“On sighting the Police they engaged us and in a returned fire, his driver was fatally wounded, while he was arrested alive,” Commissioner of Police, Joseph Mukan announced in a press statement he signed.

Mukan enumerated some of the alleged atrocities of the crime kingpin:

* the kidnap and killing of a police officer, SP Moses Egbede after collecting ransom

* killing of a soldier and a personnel of NSCDC at Gio pipeline, Ogoni last year.

* the killing of two police officers attached to the Federal Highway after their rifles were taken at Botem, Ogoniland.

“The Command uses the opportunity to urge the people of the State to continue to remain steadfast and trust in the ability of the Police to protect their lives and property”, Mukan said.

He also asked criminals to repent, relocate or face the full wrath of the law.

“The arrest of Boboski today is a milestone for the Command and Victory for the Ogoni people, Rivers and Nigeria at large,” Mukan added.