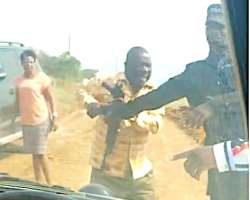 At last a court in an East Africa country remanded a Deputy Minister for Labour, Mwesigwa Rukutana, to prison after being charged with several offences including attempt murder after an incident that left a vehicle belonging to a supporter of his main, riddled with bullet holes.

Over the weekend an incident in Ntugamo town, 331.8 kilometres, west of the capital-Kampala Uganda, saw Rukutana snatching an Avtomat Kalashnikova, commonly known as A-K 47, from his bodyguard cocked it to the point of aiming to shoot at the car occupants, according to the video footage obtained by this newspaper.

The minister in Gen Museveni’s government, with dubious democratic credentials, is not new to public controversy in a country where impunity for serious violation of the law by senior officials is quite common, and has been widely condemned by civil society and international human rights organizations. Rukutana, 61, and a Member of Parliament and junior Minister for Labour, was reportedly arrested on Saturday, September 5, after he was involved in a physical confrontation with supporters of his rival political contender for the parliamentary constituency for which he is the incumbent and degenerated into a shooting incident.

Both Rukutana and his rival, Ms Naomi Kabasharira, are from the south western constituency of Rushenyi County and belong to the ruling National Resistance Movement (NRM) party.

On the day, NRM had been conducting nationwide party primaries, which were marred by widespread violence, in the run-up to the February 2021 general elections.

Rukutana had just lost the primaries to Kabasharira for the first time since 2001 when he was first elected to represent that constituency.

It is not entirely clear what exactly sparked off the incident but, in trending footage on social media, a person fitting the description of Rukutana is filmed in front of a vehicle through the front windscreen snatching an assault rifle off one of his police bodyguards and, in a frenzy, cocking and training it on the occupants of the vehicle amidst loud pleas to Mr Rukutana do desist and frantic attempts to duck, and then a panicky drive off just at the time the footage ends.

It is not clear what happened at that moment or subsequently, but that vehicle is shown in a separate footage with its windows shattered and the body riddled with bullet holes to demonstrate the extent of the damage.

It has been reported that a supporter of Kabasharira, one of the occupants of the vehicle, sustained serious injuries as a result of the incident and was rushed to hospital.

You would expect the institutional clockwork to be triggered in a functioning society to its logical conclusion, but in a country where even minor incidents are micromanaged by the head of state to keep the lid on matters, it took an order from the president to effect Rukutana's arrest as the prime suspect in this incident along with at least two of his bodyguards.

Ordinarily, powerful security and political functionaries such as Rukutana would walk away scot free with even the police helpless to do anything.

However, on this occasion, Gen Museveni's hand was presumably forced on the strength of rumours that, Rukutana and fellen out of favour for belonging to one of the powerful camps in the constituency, which pits the President against other actors for political influence.

This happening at a time when a powerful new anti-Museveni wave of young politicians, led by musician-cum-politician Robert Kyagulanyi Ssentamu, is sweeping across the nation and posing the most serious challenge yet to President Museveni’s 35-year-old rule.

With corruption, mismanagement of state affairs and human rights violations endemic in the country, there is almost a palpable feeling, especially among the young people who make up over 80% of the population, that Gen Museveni must be voted out of office.

Gen Museveni's widely publicized order to have the hitherto untouchable, Rukutana arrested is plausibly an attempt to demonstrate that he's at last reigning in on widespread impunity.

Rukutana, although a lawyer by profession, has even publicly defied a judge and made public snide remarks about her following his appearance at a Commission of Enquiry into land-related fraud.

Minister, Rukutana, a lawyer and a politician is not new in the game of impunity, whilst appearing before the Land Probe Commission, last year he told the chairperson Justice Catherine Bamugemereire, to go and report him to God.

The Commission had wanted Rukutana to explain how sums of money and tax payer, was about to fraudulently to leave the treasury following his legal opinion. ( https://www.youtube.com/watch?v=nUDHmcdFG7U&app=desktop ).

The defiant Rukutana, then refused to cooperate, telling the Judge to go to hell, and bolting out of the enquiry room. No action was ever taken against him.

Following latest antics, he has been sent on remand to a prison in Mbarara district again only on insistence of Gen Museveni himself that the police bond, which his powerful colleagues in cabinet, had secured for him be cancelled.

He reportedly faces seven charges including attempted murder by shooting, assault, malicious damage, and threatening violence, which would not attract a bond, less so a court bail until 180 days have elapsed in the case of capital offenses.

It remains to be seen if these charges will be sustained or deliberately bungled, or otherwise discontinued by the investigations or prosecution as is often the case in the matters involving pro-regime defendants.

In February 2020, a Court hearing the murder case in which the accused is a well-connected businessman called Matthew Kanyamunyu and his girlfriend Cynthia Munwangar, suspended evidence presented by a government ballistic expert when the defence raised objections on points of “material differences in two police request forms submitted to the department government analytical laboratory (DGAL) for examination.

Police could have intentionally bungled the evidence in the 2016, Lugogo shoot that claimed the life of Kenneth Akena. Akena was child activist, who was shot in the stomach by a well connected Kanyamunyu after he reportedly scratched the businessman's car while trying to reverse. It is alleged that the incident happened soon as the deceased came out of his car to express regret for the accident. That's how impunity thrives in Uganda, under the current regime.

Following Rukutana's arrest, supporters Kabasharira in Rushenyi County constituency, conducted street processions to celebrate both the victory of their candidate and the arrest of their political nemesis.

The case against Rukutana is only beginning and it can only be hoped that the celebrations are not premature!

When earlier contacted on this matter by this newspaper, the Police Spokesperson, Fred Enanga, said: "We shall be guided on whether he [Rukutana] appears in court or not."