US TO CUT $4BN IN AFGHAN AID OVER CORRUPTION FEARS 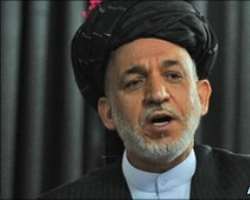 US lawmakers have voted to cut almost $4bn (£2.7bn) in aid to the government of Afghanistan, after allegations of corruption.

It comes after the Wall Street Journal reported that huge sums of cash had allegedly been flown out of Kabul international airport in recent years.

Military operations and humanitarian aid will not be affected by the cuts.

But critics fear the move could threaten crucial infrastructure projects in Afghanistan.

Meanwhile, Gen David Petraeus, who has replaced Gen Stanley McChrystal as the commander of US forces in Afghanistan, is on his way to brief US allies at Nato headquarters in Brussels.

He will then travel to Afghanistan to take up his new post, after he was confirmed by the US Senate on Wednesday.

'Lining pockets'
US Congresswoman Nita Lowey, chair of the subcommittee responsible for aid appropriations, has demanded that an audit is carried out of billions of dollars of past funds.

She said that alleged corruption in the Afghan government made taxpayer money hard to justify.

“I do not intend to appropriate one more dime for assistance to Afghanistan until I have confidence that US taxpayer money is not being abused to line the pockets of corrupt Afghan government officials, drug lords and terrorists,” Ms Lowey said.

The money could be reinstated in a few months after a review of Kabul's efforts to tackle the issue.

Republican lawmaker Mark Kirk, however, expressed concern that the slashing of funds could put important projects at risk and would not help the war effort.

He cited the example of Kandahar's electrical system, which he said was an important step to winning over the residents of the area to the US mission.

President Hamid Karzai has denied allegations of corruption by government officials, and has pledged to take a firm stance on the issue.

On Monday, the Wall Street Journal claimed that US investigators believed that “Afghan officials and their associates were sending billions of diverted US aid and logistics dollars and drug money to financial safe havens abroad”.

The BBC's Jane O'Brien in Washington says that the aid cuts will send a very strong message to the Karzai government that they need to do more about corruption.

Our correspondent says that the issue is yet another blow to diplomatic relations.

Kabul has meanwhile said that international partners should shoulder some of the blame for failing to provide oversight for contracts, our correspondent adds.

The subcommittee has not cut military funds, which are to be debated in a separate bill.

Lawmakers are due to vote as early as Thursday on President Barack Obama's request for $33bn in military aid to support a surge of 30,000 troops.