Duke , Ita Giwa And FFK To Apologise To Cross Riverians 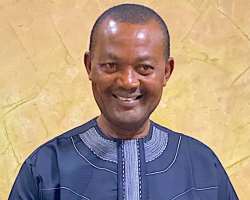 I watched with pity, the sponsored showcasing and image laundry of Governor Ben Ayade, the governor of the 'Ayade family'.

I demand through this medium that former governor Duke, former Minister, spokesperson of Gov. Ayade and Sen. Ita Giwa apologise to the people of this State for seeing us, I mean all of us in Cross River as idiots and for unfair profiling of Crossrivrians.

A few months ago, a highly respected former governor of Cross River State, Donald Duke who reinvented and rebranded Cross River at a very young age announced to the world that Gov. Ayade of 'Ayade’s family' has performed more than any other governor In Cross River, himself including and deserves a Nobel award.

A man who came into office and started destroying his legacies, killed the famous Obudu Cattle Ranch, killed the monorail, killed Tinapa, heaped refuse everywhere, ignored potholes on Calabar roads, dismantled security apparatus, brought in cultists in governance, encouraged criminals and criminality using the Ministry of Justice. No one was speared to the point that cultists sponsored by an APC politician that attacked my residence but were repelled in December 2018 were released on the advice of the State DPP.

We are all witness to the fact that kidnappings and killings were rare criminal activities in the past. The man who sacked workers employed by his predecessor just to make him infamous. A man who has done promotions and for three years, the beneficiaries are still in the old salary. A man who has deliberately removed names of employees, branding them ghost workers and when they all appeared, he refused to recorgnise them. Those sacked and branded ghost workers have families and dependants yet he has budgeted N24 Billion to fight covid-19 while the isolation centres are under lock and key while infection casses are under-reported. A man who has gone to his own people and used ‘man pass man’ to expropriate over two hundred thousand hectres of land from his people for a utopia tourist community, leaving the people helpless – without farmlands.

A man who has diverted over N200 billion of local government funds, the first of all governors in Cross River to subject elected local government councils in penury and misery. Local government Chairmen and their deputies are trekking to work or using public transport while other local government workers are hapless. Very soon, a fasting seasion will be organized against him unless he changes his attitude to governance. Former Gov. Duke who built the major roads In all our cities, including roads leading to Effruya, Etung LGA came out to support evil, mentioning A NOBEL PRIZE sardonically for kleptomaniac governance. I am still imagining What a highly respected Duke is looking for from Ayade.

To my friend Femi Fani-Kayode, he got more than he bargained for and should be full of regrets for the image laundering trip because he ignored the bashing from his PDP colleagues which would have served as a warning not to come on his visit to Cross River. Anyway, whatever the filibustering by FFK, it has nothing to do with the negative image of Ayade. If this Government goes to a poll today, they will certainly not get 20% of votes in Cross River State.

The fifty six Bakasi bungalows are now his propaganda tool. Hahahahahah. N500 million received every month for Bakassi project is N6 Billion in one year. This should build 400units in a year. Therefore, making a pilgrimage of 156 houses that are not more than N15 million each does not square up. During my service days, I was the Chairman of IGP’s task force on monitoring of police projects and procurement. I quite understand the cost implication of such projects. Where is the spaghetti flyover for Odukpani junction leading to Northern part of Cross River, Uyo and other parts of South South which has posed a great danger to Commerce and social cohesion in the state as motorists spend about six hours to cross the bad spot. Tell me how business can prosper under such collapsed road infrastructure. The federal government has already awarded contract for the rehabilitation of the road and governor Ayade is the contractor or you don't know? He is the owner of hundred Freeland trucks with no registration number plates, denying the state the much needed revenue.

He lied to Femi Fani-Kayode, which is his way of life. One wonders why he did not take Femi to Northern part of Cross River and to the moribund Obudu Ranch. I forgive Femi for now, hoping that his next visit to Ayade will be more revealing.

To our distinguished Senator Ita Giwa. I will implore you to please, please and please respect youself. Your children could be older than Ayade. Don’t let him use you to legalize fraud. What is the population of Bakasi compared to hundred fifty six houses. Did the Mama that Ayade brought out as an exhibition bait to the world tell you that Bakasi is desirable of such mockery.

You must certainly apologize to the State and strictly desist from being used by Ayade to scam the people. Your relevance in today’s politics has washed away. We will rather expect political actions from those that you groomed and empowered while you advice from the rear. Can any politician boast of your mentorship?

In all modesty, the records are there that while I was in charge of Police schools, as THE FORCE EDUCATION OFFICER, I influenced the rehabilitation of Police Primary School Calabar with funds from the then MDG. I constructed a befitting guest house at Police Secondary school, Akpabuyo, constructed three blocks of modern barracks at the same school, constructed a new Primary School at Akpabuyo, established a police primary school in Ogoja and won a superior argument to establish the South-South/ SouthEast headquarters of Police research and planning in Calabar. Before my exit from the Police, I influenced federal employments for not less than two Hundred and fifty young graduates of Cross River South, Central and North. I have no house or land in Calabar, Port hacourt or any other city in Nigeria. My residence in Abuja is a contribution of a patriotic Nigerian who felt that I deserve a decent accommodation for my household after my sudden retirement.

Governor Ayade knows that nobody can influence or compromis me and my stand for good governance for my people. I pledge to continue with my selfless struggle to install good governance in Cross River State. I will continue to speak for numerous others who have been subjected to fear because of Ayade’s government-empowered criminal non-state actors whose mission is to permanently shut up critics through kidnapping, murder and other criminal intimidation. Henceforth any move by this State Government to use illegal or subterraneous means to oppress critics will be resisted lawfully.