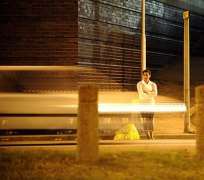 A few miles from the soccer stadiums and tourist-packed hotels, Caroline Misavas is spending the World Cup selling her body.

She stands among clusters of a half-dozen girls in the heart of Johannesburg's decaying Central Business District. Sex costs as little as $5. A night is $50. Ms. Misavas wears a female condom to protect against HIV.

The prediction that 40,000 prostitutes would move to South Africa for the World Cup has been widely discredited by statisticians and activists. Even if the numbers aren't as high as projected, some have still come.

Their stories show how the razzle-dazzle of international sports can spark big dreams in the minds of a few people who are down on their luck, especially in a place as poor as Africa.

Established prostitutes who live in a city full-time no longer need a sidewalk. They have newspaper ads, websites and a network of cell-phone contacts. But foreign women who don't know their way around South Africa have no choice but to walk the streets.

Ms. Misavas, a 28-year-old grade school teacher, fled a violent husband and Zimbabwe's wrecked economy. Her friend told her about the World Cup. She got on a bus.

A car passes a prostitute standing on a curb in April in the city of Durban in South Africa.

“It was the situation that forced me to do this,” she said on a recent night, over a dinner of chicken burgers and fries. “I had never done this before.”

She has three kids, two who live with her mother in Zimbabwe, one who stays with her in Johannesburg. She isn't sure yet what she'll do when the World Cup is over.

Once in a while, the police come to arrest some of the girls. They fine them $30. Ms. Misavas hasn't yet been arrested. Activists say prostitution should be legal in South Africa, so they can work with women to prevent the spread of HIV and help some escape prostitution.

Business on the streets has been up since visitors started arriving for the World Cup, but only a little bit. During games, Ms. Misavas noted, “there are fewer customers.”