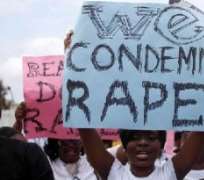 Twenty-one soldiers and police officers are on trial for rape in the east of the Democratic Republic of Congo, judicial sources told AFP on Wednesday.

Presiding judge Major Alain Giongenga-Lwanzu said a military court has been trying the accused in South Kivu province since Monday, in the presence of 23 of their victims who joined forces in a civil action.

The women are being supported by Congolese gynaecologist Denis Mukwege, the 2018 Nobel Peace Prize winner, and his Panzi Foundation.

The 21 accused are being prosecuted for rapes and sexual assaults committed this year in the Ruzizi plain between Bukavu and Uvira, in a region destabilised by armed groups and banditry.

“Women of various ages including a nine-year-old girl, but also a young boy” are among the victims, according to the Panzi Foundation.

Mukwege received the Nobel Peace Prize for his work in reconstructive surgery for female victims of sexual violence on the sidelines of the armed conflicts that have destabilised the Kivu region for nearly 30 years.

His foundation also wants to provide legal support to victims to fight against the impunity of warlords.

The trial aims to be “educational” and to “dissuade armed men from committing acts against the law such as taking women by force,” captain Joseph Nganama, military prosecutor, told AFP.

It is also a message so that “civilians emerge from their fear and know that the military is not above the law,” he added.

The crimes were committed this year in several villages including Luvungi, on the border with Burundi, according to the prosecution.

The verdict is scheduled for September 2, the court said. (AFP)