NOW THE INTEGRITY OF THE MEMBERS OF THE DR PIUS OKIGBO COMMITTEE ON THE GULF WAR OIL WINDFALL IS BEING CALLED INTO QUESTION, CAN THEY SPEAK UP? 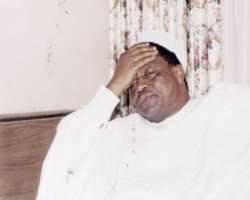 The debate is heating up, a very monumental national crime is now reduced to a child's play. Be it the US$12.4 billion dollars gulf war that was stolen out rightly or the Halliburton bribe scandal.

Commissions of inquiry be they judicial or administrative now is just another avenue for the thieving ruling elite to steal our commonwealth the more. Of course it is common knowledge that they collect sitting allowances and are lodged in the best hotels in the town wherever they chose to sit. Unfortunately hardly do they turn in their reports and that is the end of it.

6. Obong Ufot Ekaette who served as the secretary.

Ordinarily, members of the committee should have their personal copies of this report even if it is a souvenir copy.

A coalition of human right group have now been able to lay their hands on a copy and have submitted it to government. But that is not the issue I am driving at now, the content of the report is being distorted in the media by those indicted in the report as have stolen the $12.4 billion dollars. By implication the integrity of the members of that committee is being called into question.

We challenge and appeal to the members of the Okigbo committee to come out in the open to defend their integrity. Surely they must be in possession of their personal copies of the report. It is up to them now to defend their hard earned integrity or be damned as people who did a shoddy job to deceive the public.

Seriously governments must stop wasting taxpayers’ money to set up committee whose reports will end in dustbin at the end of the day.

Nigeria will continue to retain its place as a nation of prime corruption when those who steal from public treasury are protected by the state.

This is a challenge to the Dr Pius Okigbo committee members to come out and defend their report. History will be kind to them if they come out to talk now when it mattered most.