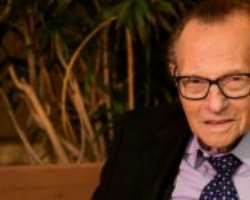 Larry King is mourning the death of two of his children in the space of three weeks.

The renowned TV interviewer faces a double tragedy after the sudden death of Andy, 65, who died three weeks ago. King’s daughter Chaia, aged 52, died on Thursday, a ccording to Page Six . She had been battling lung cancer.

A source said: “Larry and his three remaining children are distraught, and Larry’s still recovering from his own health issues from last year,” the website reported.

The veteran broadcaster continued working, it is reported, as a way of processing his grief.

King adopted Andy when he married Alene Atkins in 1962. Chaia was born in 1969, after they remarried.

He became one of the most famous figures in broadcast news with his nightly interview with prominent individuals on Larry King Live, which ran on CNN from 1985 to 2010.

Larry King, 86, has been married eight times to seven different women and has five children. King filed for divorce from his seventh wife, Shawn King, after 22 years. He married and divorced Alene Akins twice.

He has overcome several serious health issues in recent years, including a bout with lung cancer two years ago. He had a stroke in 2019, after which he admitted he contemplated suicide.

Read the original article on Insider