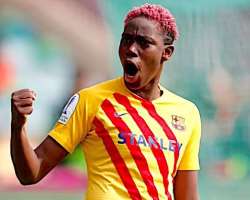 Super Falcons Captain Asisat Oshoala has revealed that she is not after personal glory at Barcelona but she's more interested in team glory.

Oshoala played a pivotal role in Barcelona's 1-0 victory over Atletico Madrid in the Women's Champions League, when she provided an assist for the only goal of the match.

The former Arsenal star has scored only once in four Champions League appearances for Barcelona Femenin but she has an impressive tally of 26 goals in 26 appearances in all competitions.

"This was our first game in a very long time so a lot of things could have been better," Oshoala told Uefa.com.

"Coming from a couple of months without playing, trying to get our rhythm going, we don't expect everything to be perfect but we can be better, for sure.

"Getting a goal at the end of the game was a very good one for us. That's what big teams do. Just make sure you get the goal whichever way you can.

"You have to respect every side, they're a very good team – one of the best in Europe. It was a tough game, but at the end of the day we were victorious and that's the most important thing.

"It will give us a lot of confidence and a different mindset going into the next game.

Barcelona Femenin will take on Wolfsburg in the Semi Final.