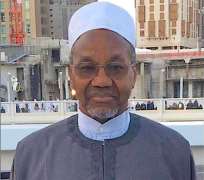 Mohammed, son of elder statesman, Mamman Daura, has said his father is hale and hearty, contrary to stories about his demise, describing it as wicked and reminded those behind the story of their own mortality.

There were reports early in the week that, Daura, a nephew and confidant of President Muhammadu Buhari was allegedly flown abroad for urgent medical treatment.

But his son, in an exclusive engagement with THISDAY yesterday, dismissed this, saying the stories were fabricated.

“Today is the 21st of August, 2020 and for the past couple of days, we have been forced to deny, numerous times, a completely fabricated story about our father’s wellbeing. Alhamdulillah Baba is perfectly fine. He neither has a history of renal problems nor does he have any breathing difficulties like was suggested in the concocted news story.”

He reminded those who may derive awkward pleasure from this negative story of their impermanence, saying, “Those that happily shared and even rejoiced over this fake news story should know one thing about life is that no one makes it out alive. We should collectively be humbled by our own mortality.

“We would like to extend our gratitude to the many well-wishers who have called or sent messages to pray for our father. We thank you for the prayers and well wishes.”

Mohammed did not comment on whether his father was indeed flown out, where he was taken to, and for what reason, however, some reports early in the week alleged said he was flown to the United Kingdom on Wednesday, and that it was purportedly confirmed by Daura’s aide and close friend, Aminu Balele Kurfi, who said the nephew of President Mohammadu Buhari travelled to London for routine medical check-up, stating that news of serious illness was inaccurate.

Reports said Kurfi acknowledged that 80-year old Daura was at the funeral prayer for late journalist, Wada Maida on Tuesday and did not show any sign of illness, saying he saw him off at the airport on Wednesday and received notice of his arrival in the UK.

According to one of the reports, Kurfi said, “At 80 years it is natural that he will from time to time undertake medical checks.

“If he were sick and the sickness is COVID-19, do you think UK authorities will allow him to travel there at this time?”