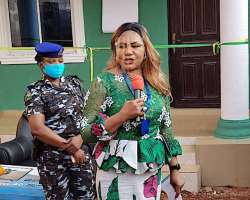 The houses are among the twenty-seven houses built by her NGO, CAFE and has been handing over in phases to the beneficiaries so as to ensure strict adherence to Covid-19 protocol.

The beneficiary at Ozubulu, Mrs Eucharia Nwakibie, lost her husband in 2012, and had been forced to live in her father's house afterwards due to accommodation difficulties, with seven of her children, two of whom had died during the challenging periods.

Septugenarian, Mrs Victoria Udenka is the beneficiary of a 3-bedroom house at Ameze Aguleri.

The newly-constructed bungalows, like others previously constructed, come with a borehole that would serve the beneficiary and her community and a standby power set that would power the building as well as the water.

Presenting keys of the new houses to the widows, Mrs Obiano said that she has always felt the need to provide succour and revive hopes of the less privileged. She urged them to live comfortably and in peace without disturbance by anyone.

She also noted that she has always had a strong sense of responsibility to build an atmosphere of difference with her NGO in Anambra State, having trained over five thousand youths and women on vocational skills and helped them start up and sponsoring other humanitarian programmes.

Mrs Obiano who also expressed satisfaction with the low recorded cases of coronavirus in Anambra State, reminded the people of the need to keep adhering to COVID-19 safety protocols as the disease remains effective and deadly. Commending the gesture, Anambra State Commissioner for Women and Children Affairs, Lady Ndidi Mezue, said that the beauty of Osodieme's philanthropy is that she does not know any of the beneficiaries of her housing programme because they are randomly selected. She thanked her for coming to the aid of the widow and many other beneficiaries of her innate acts of kindness.

In respective remarks, the Managing Director of Awka Capital Territory Development Authority, ACTDA, Venerable Amaechi Okwuosa, that of Anambra Signage and Advertisement Agency, ANSAA, said that the governor's wife has adopted the biblical injunction of coming to the aid of the desolate in the society, a virtue that complements Governor Obiano's excellent administration. Earlier Chairman of Ekwusigo Local Government Area, Barry Austin Enendu, said that the governor's wife's pattern of charity is unique because she has continued to revive the hopes of the downtrodden through works that have remarkable effects.

The houses are among the twenty seven built so far by Mrs Obiano and handed over to indigent widows since CAFE was officially registered as a charity organization in August 2014.