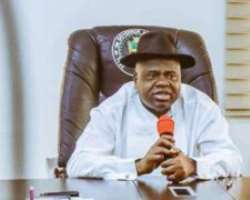 Bayelsa State Governor, Douye Diri, on Tuesday appealed against the judgement of the Bayelsa Statement Election Tribunal which nullified his election as the governor of the state.

The governor through his lawyers filed the Notice of Appeal at the Court of Appeal in Abuja, the nation's capital.

Diri in his appeal is challenging the majority judgement of the Bayelsa State Governorship Election Tribunal which nullified his election. He faulted the entire majority decision of the Tribunal as delivered by Justice Yunusa Musa and Justice Sikiru Owodunni.

According him, the cause of action of the ANDP challenging its alleged unlawful exclusion from the election that was conducted on November 16, 2019 crystallised on , the Election Day when it claimed to have realised that INEC indeed did not place it on the ballot.

The election was nullified based on a petition by the Advanced Nigeria Democratic Party (ANDP), which argued that it was unlawfully excluded from participating in the election.

The tribunal ruling can, however, still be challenged at the appeal court.

More details on the tribunal's Monday ruling will be provided in subsequent updates.

The ANDP had through its governorship candidate, King Lucky George, and National Chairman, Charles Ogboli, approached the tribunal seeking the nullification of the November 19, 2019 governorship election.

The prayer of the party is an order for fresh election on the grounds that its name and logo were excluded from the ballot papers used for the election.

The counsel to the party, Kehinde Ogunwumiju (SAN), argued before the Tribunal that INEC witnessed and monitored its governorship primary and that it was, therefore, strange that it still went ahead to exclude from the election.